The merchant banking and financial advisory firm based in the United States, says it will now assume the rights and complete operating control over the global social platform business.

The acquisition and financing was lead by Adam Levin, managing partner at CCP, in partnership with business strategist Paul Abramowitz and web entrepreneur Richard Hecker.

CCP will take over Bebo’s global operations immediately and retain a San Francisco-based headquarters. Exact terms of the deal are not being disclosed by either party.

“The young, highly active user base, revenue history, presence in countries throughout the world and solid technical infrastructure make it an attractive media platform both as a standalone entity and in the context of our broader investment objectives,” says Levin.

He adds: “This sale is important for Bebo’s users and for AOL. The deal will allow Bebo’s users to remain within the social platform that they know and love, while enabling a new owner to bring new possibilities and experiences to bear. For AOL, the transaction will also create a meaningful tax deduction, which should allow us to more effectively manage our tax strategy.” 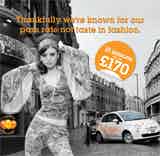 The British School of Motoring (BSM) is increasing its online activity with the launch of a six-figure integrated summer ad campaign, as it looks to establish itself as the key destination site for young drivers.

Apple has confirmed that it will debut its iAd mobile advertising network on 1 July on updated iPhone and iPod touch devices. After the success of the iPhone in introducing apps, will the IT giant be able to win the hearts of advertisers with its new offering?