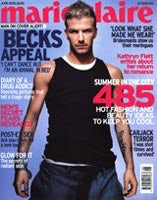 Marie Claire, IPC Media’s women’s glossy, is to flood the newsstands with an additional 60,000 copies, following the media frenzy surrounding its June issue, which comes out today (Wednesday) and carries David Beckham on the cover.

The printing of extra copies before it goes on newsstands is the first time the magazine has made such a move, and the issue will also be a first for Marie Claire, which has never featured a man on its cover in its 14-year history.

Marie Claire publishing director Rita Lewis says: “This is the first time, prior to going on sale, that retailers have called, demanding more issues. The excitement surrounding Beckham on the cover has created expectations of an exceptional sale. The retailers know when it makes sense to cash in.”

Lewis adds that IPC wanted to track sales before upping its circulation, but because of increased demand from retailers, Marie Claire was put back on press.

Launched in 1988 as the intelligent woman’s read, Marie Claire has been trailing behind the likes of National Magazine Company’s Cosmopolitan and CondÃ© Nast’s Glamour. According to the July to December 2001 Audit Bureau of Circulations figures, Marie Claire’s circulation was down 4.6 per cent yearly, to 382,094 copies. However, its period-on-period circulation was up by 3.2 per cent.

The June issue includes a fashion spread and an interview with David Beckham. The Manchester United star will appear on the cover modelling his latest hairstyle.