The marketing build-up to David Beckham’s arrival at US football club Los Angeles Galaxy (LA Galaxy) later this year takes sales hyperbole to new limits. Radio and print ads are to run across the US over the next few months featuring lines such as “Words are not enough”, “The dawning of a new era” and simply “He’s coming”. One insider says the English midfield football star will be portrayed as a mixture of Superman, Clint Eastwood and Arnold Schwarzenegger all rolled into one.

These claims sound overblown given the limited effect many observers expect the former England captain to have on the development of US “soccer”. But it is no exaggeration to suggest that the Beckham deal moves sports marketing onto a new level.

The extraordinary agreement that takes the 31-year-old footballer from Real Madrid to the Californian club was masterminded by Simon Fuller, chief executive of talent management company 19 Entertainment.

Master Strategist
Pop promoter Fuller is a relative newcomer to sports marketing, but the Beckham deal displays all the hallmarks of strategies he has employed previously. It is classic Fuller, creating entertainment brands and using them to exploit multiple streams of revenue. He did it with The Spice Girls in the late 1990s, striking a welter of sponsorship deals for the band that led Marketing Week to accuse him of damaging brand owners’ interests by “over-Spicing”.

More recently, he has exploited the Pop Idol format – American Idol in the US – now the world’s most valuable television property, worth some $2.5bn (£1.3bn) globally. The show earns revenue from selling the format worldwide, and from phone-in votes, CD sales and merchandise. Fuller has also been hired by Honda to boost Formula One’s youth appeal.

In marketing terms, exploiting synergies is hardly new. But it usually comes as a result of success rather than as a precondition for it. Disney, for instance, created much-loved cartoons and found it could extend its brand into merchandise, stores, product endorsements and theme parks. Fuller has reversed the formula and looks at properties as brands with synergies that can be exploited.

Beckham will join LA Galaxy on a free transfer from Real Madrid in the twilight of his career, dropped from the England team and underused at club level. Some see it as the sell-out of the century. Even so, Fuller claims the US deal will be worth $250m (£130m) over five years, making Beckham one of the highest paid sports stars in the world. But this sum is a top-of-the-range estimate. Achieving it will depend on Beckham invigorating soccer in the US.

But four-fifths of this assumes that Beckham’s celebrity status will help extend the popularity of soccer in the US and that new fans will come flocking to LA Galaxy as a result. However, it is one thing to be a global sponsorship property when you are captain of the England football team and playing for one of the world’s top clubs, whether Real Madrid or Manchester United. But tucked away on the edges of LA playing to crowds of some 24,000 in Major League Soccer, which has just 11 teams and a minor television rights deal, will not give him the same exposure.

This is where Fuller’s public relations and branding skills will come into play. Beckham will need to be kept in the US limelight for years to come. His contacts with Hollywood stars and his wife Victoria’s career will have to be milked for PR opportunities to get him talked about in the US media. If anyone can help the Beckhams crack the country, it is Fuller.

At the same time, soccer will have to grow significantly in stature for the vast sums talked about in the deal to be achieved. There are those who doubt this will happen. Football’s success in Europe and other parts of the world is based on its importance in defining tribal and national identity, whereas in the US these needs are fed by American football, basketball and baseball. 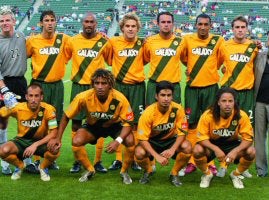 The Long Haul
“I don’t think his arrival alone is going to transform soccer,” says sports marketing expert Matthew Patten. “That will only happen with homegrown players and success in major tournaments. It is a long, hard slog.”

Soccer is popular in the US as a form of exercise for children, but as spectators, their loyalties switch to established sports as they grow older. There is a swelling population of immigrants from footballing cultures such as Mexico, though they are more likely to follow the sport in their own countries.

Turning Beckham into a household name in the US will inevitably be a major marketing challenge. Some studies suggest Beckham is recognised by only 40% of Americans, compared with 99% of Britons and 93% of people in Asia.

Even so, it would be short-sighted to underestimate the combined marketing talents of Fuller and the Beckhams. M&C Saatchi Sport & Entertainment director Jamie Wynne-Morgan, who has worked with David Beckham on sponsorship advertising, says the player has skilfully managed his career as an icon/ “He’s very hands-on and knows exactly what he wants. Scripts and ideas get sent to him directly, he gets involved in the process. He’s always been very much in control of his image with sponsors.”

Meanwhile, Fuller appears to be on a roll. He has staged a daring smash and grab in the world of football, and could transform the way it is marketed. One observer says that leading sports marketing agency IMG – set up by the late Mark McCormack who created sports rights management in the early 1960s – and Octagon, another established player, “had better watch out”.

Fuller first entered sport by negotiating the deal for Liverpool’s Steve McManaman to go to Real Madrid, but then abandoned football, reportedly saying: “It turned out not to be my scene. The people in that world are not the kind I want to mix with.”

The New Economy
However, he stormed back onto the football stage when he gained control of Beckham’s non-football affairs in 2003 while he was at Real Madrid, poaching him from SFX Sports Group, which had handled Beckham since 1996. Last year, Fuller got even further into football by snatching the England squad’s sponsorship rights from CSS Stellar. It was SFX that launched Beckham as a brand icon, engineering sponsorship deals and plotting his rise to fame in the Far East. But that was in the “old” sports economy.

Ben Pincus, chief executive of sponsorship agency The Works, believes that Beckham’s move from SFX to 19 Entertainment was highly significant. “He was captain of the England team but moved away from the traditional model and went for an agency with limited experience of the sports business,” he says. “It was an act of brilliance. Would he have got the deal in LA with SFX? Yes, but it would have been a standard deal. 19 looks at sport as entertainment. It has the ability to bring those worlds together. It is classic convergence.”

It has been reported that other major football stars are keen to follow Beckham to the US and cultivate their celebrity status. It may be no overstatement to say that the deal hatched by Beckham and Fuller – whether it works or not – heralds the dawning of a new era in sports marketing.

Cometh the hour, cometh the woman. Fru Hazlitt’s triumphant return to GCap, or rather Capital, cannot have happened a moment too soon for chief executive Ralph Bernard. Her timely arrival will – he hopes – be the magic bullet that slays all the naysayers – and there are plenty of them – who have been […]

Deluded politicians are hoping to instigate a ‘buy British’ campaign by getting people to quiz waiting staff on the history of their dinner.