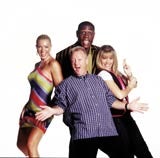 Channel 5’s relaunch of Seventies TV team gameshow It’s A Knockout is to be sponsored by pub and restaurant chain Beefeater as part of a &£1.5m campaign celebrating the company’s “Britishness”.

The Whitbread-owned group has also signed up celebrity chef Brian Turner for a series of 20 three to five-minute programmes on British food, which the chain is funding.

The first programme in the series is expected to go on air on September 8.

The first of 11 programmes with Beefeater-branded sponsorship bumpers, created by Mother, airs at 8pm on September 3.

Turner will act as a food consultant on the regular Ready Steady Cook programme on C5, providing advice on recipe development, menu selection and staff training. Turner’s own series, Great British Food Made Special, will be repeated across C5’s schedule over the next five months.

Both sponsorship agreements will be supported by a promotional print campaign in women’s consumer titles, with recipe cards and offers.

The recipes will be compiled in a cook book – to be given away at Beefeater restaurants.

Beefeater brand marketing controller Deborah Cutler says: “The appointment and forthcoming campaign give a new edge to our strategy. The sponsorship will focus on our Britishness and commitment to providing great British food.”

IPC lad mag Loaded and Flextech-owned men’s channel Bravo are close to finalising a masthead TV deal which will bring the title that galvanised the men’s magazine sector to television for the first time. The series of 12 short programmes will feature male lifestyle interests such as sport, travel and women. The two companies are […]

Entertainers and promoters ranging from Don King to George Michael have been offered the right to give their name to a proposed arts and education centre in London in return for &£1m in sponsorship. A trust, backed by &£6.35m of lottery money, is restoring the listed Victorian town hall in upmarket Hampstead, but must raise […]

AOL UK, the Internet service provider (ISP), has appointed marketing consultant Keith Hawkins as marketing director to oversee the launch of the subscription-free Internet access service, Netscape Online. Hawkins replaces Karen Thompson, who was recently promoted to managing director. He will be responsible for developing overall brand strategy, including Compuserve, the business ISP which AOL […]