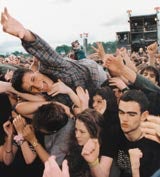 There is an almost Pavlovian association between alcohol and sport that is somewhat at odds with the effect drinking has on sporting prowess. That the two are so strongly linked in the minds of consumers is partly a testament to the tenacity and subtle skills of brand sponsorship chiefs.

So, when beer brands turned from their key platform of football in 2000 and started pouring money into music sponsorship, the move was greeted with surprise.

However, the shift has proven short-lived and the signs are that beer is back in the sports arena – demonstrated by Budweiser’s 50m deal with a Formula One team (MW last week) and Carling’s recent 11m deal to sponsor the League Cup (MW June 26).

Carling’s decision reverses its 20m strategic focus on music sponsorship. In 2001, the company signed a three-year contract with Clear Channel Entertainment, and linked up with more than 30 music festivals. While it will retain some of its musical links, the brand sees the potential in football once again.

Rival Budweiser’s sponsorship of the BMW Williams Formula One team also marks a retrenchment from music. During the past few years, the American beer giant has produced CDs and sponsored festivals and parties through its True Music programme. But this year it has changed its self-styled image from the King of Music to the King of Sport.

In line with this shift of focus, the brand will become the official beer of the FA Premier League as well as becoming a sponsor of several football clubs and the 2006 FIFA World Cup.

The move back to sport was inevitable, says Stephen Pearson, managing director of sports agency Sportacus. He believes that music cannot be leveraged as successfully as sport, because it lacks the mass market platforms. He adds that sport has become much cheaper to sponsor over the past three years, with the value of some packages being slashed by 40 to 50 per cent.

Andrew Marsden, category director at Britvic Soft Drinks, which distributes and markets Pepsi-Cola in the UK, agrees that sport will always make sense for drink brands – whether alcoholic or soft – seeking to attract a younger male market. He says: “Football is most appropriate for us to reach young adults. We have a massive reach for Pepsi with connections to Manchester United and Real Madrid.” Rival Coca-Cola has always been heavily involved in sports sponsorship and invested in last year’s World Cup and Euro 2004.

Team Marketing managing director Frank Leenders says that music sponsorship is not as well developed as that of sport: “Music is not as professionally run as sport, and I’ve heard companies say that they want to do more but have been disappointed before.”

IMG Consulting vice-president Daniel Zammit says music sponsors miss the definite volume of market that sports offer. He adds that it is difficult to establish a long-term foothold in music, where trends change rapidly.

“People don’t follow music like they do a sport,” he says. This is probably why Pepsi’s links and tie-ins with teen pop stars such as Gareth Gates are usually for just one year.

Alastair Macdonald, group managing director at sports agency Connexus, says: “Logos are an accepted part of sport, but this is not credible in music. The lead guitarist can’t have a logo on his shirt – people would reject the brand.”

Other industry sources agree that branding music events can be damaging. One insider points out that while MasterCard has become the biggest sponsor of football in the world, its former connection with The Brits music awards still grates. He asks: “Exactly who were they trying to sell credit cards to with that association?”

This is the 50m risk that Budweiser is taking in sponsoring BMW Williams. Formula One sponsorship, says Sven Zehnder, marketing director at the Sauber racing team, has unique advantages. It has a global market and additional marketing benefits such as building client relationships, brand development and motivating staff.

But, he says, there are problems that affect Budweiser. Global brands benefit most from Formula One, but he worries that Budweiser is not large enough to take full advantage.

He adds that there may also be problems with the association, as both Anheuser-Busch and smaller independent Budweiser Budvar can use the trademark “Budweiser” in the UK and much of Europe.

Zehnder adds there are concerns about linking driving with drinking alcohol, although he mitigates this by saying: “You are talking to the people watching at home, rather than driving.”

Budweiser also seems to have made the right choice in the winning Williams team. Mobile phone brand Orange’s 31m sponsorship of the poor-performing Arrows team in 2000 is widely regarded as a flop.

Marsden says that brands wanting to target younger markets can focus on four areas: sex, fashion, music and sport. “But,” he adds, “the first two are difficult as fashion changes fast and sex is tough to sell. It’s the last two that can make that bond between brand and target market real – if it’s well done.”

The industry agrees that music can be an effective sponsorship property if handled properly, but it is far more difficult to leverage than a sporting event. Sport, says IMG’s Zammit, gives tangible benefits to a global market, and he adds that clients have started asking for a mixture of marketing links with sports, music and fashion events.

This combination is a stance beer brands appear to be set on: maintaining links across several sponsorship sectors and keeping some involvement with music. As Macdonald says: “Both appeal to young men and can complement each other. Those who don’t watch sport follow music, and vice-versa. Brands can’t go far wrong with links to both.”