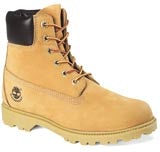 Riding in on a wave of Americana, Timberland stamped its mark on the UK and across Europe in the late Eighties. A swathe of positive publicity propelled the brand to the forefront of fashion as its sand-coloured boots became ubiquitous, sported by celebrities, music stars and fashionable youngsters.

Fifteen years on, the “iconic” Timberland boot faces fierce competition from the likes of Adidas and Nike, while the label’s shoes and clothes are less fashionable. The brand is now looking for a European marketing director following Pat Mitchinson’s departure (MW last week).

When Mitchinson joined Timberland in 2003, she was responsible for developing consistent marketing across Europe as part of a strategy to establish a unified global message. Last year, Timberland decided to hire agencies on a project basis for its $10m (&£5.5m) global ad account, just two-and-a-half years after centralising the task into Fallon London and New York. It split with Fallon early last year.

Timberland’s “Make It Better” ad campaign, by Arnold, focuses on the environment and the outdoors, but observers warn that the company needs to do more to target younger consumers and should be wary of complacency, with credible rivals such as Nike making inroads into its core outdoor market.

Yet the family-owned company insists profits are rising, albeit steadily; that it remains at the top of its core markets; and that product innovation will keep it there. Timberland managing director and vice-president for Europe Richard O’Rourke says the company is not trying to recapture Timberland’s status as a fashion brand. Instead, he says, it intends to focus on product development in shoes, clothing and accessories for “outdoorsy” people of all ages.

“Timberland does not seek to lead trends; we seek to be fashionable within a trend,” he says. “In Timberland, everything is born from the principle of the boot and the boat shoe. Products should have a function first and be fashionable second. We want to be true to that.”

O’Rourke adds that , in 2004, European revenues were up six per cent compared with 2003. He says Timberland will focus on its womenswear and accessories, which make up just five per cent of revenue but is a growth area. However, he acknowledges that the company could appeal to a “more European” and younger market, saying that design centres in London’s Covent Garden – opened two years ago – and Italy are key to this.

Leagas Delaney chairman Tim Delaney worked with the brand when it was introduced to the UK and saw its meteoric rise. He says Timberland should look back to that time and promote its brand more strongly – and urges it look again at the youth market. “The boots are doing well, but the clothes are not,” says Delaney. “Stick with your roots but recognise where the volume is, as Adidas did with its Originals collection. Timberland should introduce a youth range – make it a Timberland for younger people. The business is ‘outdoorsy’, but its growth came from the street; it should look to the street again and build on that rather than deny it ever happened.”

Branding analyst Nick Liddell, a director of Interbrand, says Timberland is “an incredibly well maintained brand”, which believes in its “Make It Better” philosophy. He thinks Timberland is on the right track but needs to fight off competition from the big sports brands. It also needs to develop sub-brands, he says, as long as they don’t detract from its core business, and focus on untapped geographical areas, tailoring products to different markets.

O’Rourke remains stoic: “It is a personal point of view as to whether consumers are in or out of love with Timberland as a brand. We don’t pay any attention to that. We are in the business of making footwear and apparel. We are not looking to build an icon that attracts young consumers – we want to speak to con

In 1973 the Abington Shoe Company introduced Timberland as the brand name for its waterproof leather boot. Three years later, the group name was changed to the Timberland Company

Footwear accounts for 78 per cent of Timberland’s global sales, with about 60 per cent of the company’s revenue coming from the US