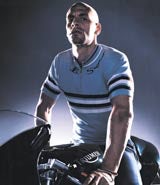 Ben Sherman marketing director Andy Rigg is leaving the clothing company to pursue other interests after nearly three years in the role. He will continue to advise chief executive Miles Gray on marketing strategy but is keen to move to a post with wider responsibilities.

Rigg is responsible for repositioning Ben Sherman as a fashion brand, moving it away from its associations with yob culture by extending into women’s fashion. He also oversaw the signing of Manchester United footballer Rio Ferdinand as the face of the brand and persuaded him to become a partner in the business. He also oversaw Ben Sherman’s role as the official clothing supplier to Team GB at this year’s Olympics.

Rigg joined Ben Sherman from Puma, where he was UK marketing director, in January 2002 (MW January 24, 2002). He was at the sportswear brand for over ten years and held a variety of roles. He oversaw the launch of the Puma Disc sports shoe.

During his tenure at Ben Sherman, Rigg increased the brand’s marketing budget sixfold to &£3m and worked to improve its reach in the youth market. It ran a print campaign in men’s magazines this summer that focused on the range of products in its collection.