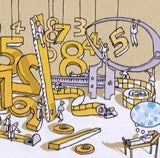 The best ideas seem to come from nowhere. They arrive when you aren’t expecting them, when you are far away from work – in mind as well as body. But “Eureka!” moments do not happen to everyone. Daydreaming may inspire a business concept, but money-spinning ideas only occur to those who understand the market. Market research can provide information that feeds creative thinking and helps it to become a reality.

Yet a recent paper by Anthony Tasgal, who runs strategic consultancy PDV, argues that marketers place too much faith in research that takes a rigid approach. Tasgal won the Best Paper award at the 2003 Market Research Society Conference for his efforts. Many corporations, he says, are basing management structures on an outmoded model. The model runs a business like a factory, where “the manager is the omniscient and all-powerful scientist manipulating the passive worker.” The problem is that managers impose a rigid structure to control work, but as the business world persists in being unpredictable, such structures fail.

Business leaders are fixated on numbers, and numbers cannot measure everything that counts. Tasgal writes: “What’s really important can’t be measured,” and adds that: “The boom in auditors, accountants, financial and even (dare I say it) pollsters and researchers has created a sort of self-perpetuating oligarchy of datacrats, fuelled by what could be termed ‘Runaway Measurement’.”

It’s not the counting that counts

Our society’s obsession with numerical measurement extends to the way we evaluate public services, including education and the NHS. But are schools being improved by having to contribute to league tables? Tasgal says that the pressures of administration that such systems involve can push organisations to focus on projects that are easy to measure rather than those that are most worthwhile: “The dismal insistence on targets and unstinting evaluation have drained much of the vitality and originality out of the marketing discipline.”

Clare Bruce, managing director of market research agency Nunwood Consulting, agrees that marketers demand too many numerical answers: “Unfortunately, the desire to turn research into a science is led by senior managers, who require the safety of a solid measurement before giving the final go-ahead. In fact, it is qualitative research that can sometimes best help marketers. In a world where product differentiation is disappearing, it is often the intangibles that are able to create sustained competitive advantage.”

One example of a company that took the numbers approach too far when carrying out research was Goodyear in the US a few years ago. Andy Nairn, joint head of planning at Miles Calcraft Briginshaw Duffy describes how the company used electrodes to measure people’s physical reactions, in order to measure feelings such as excitement. Nairn says: “It was so pseudo-scientific. It was a terrible methodology.” The company also did more conven-tional pre-testing at the same time – unsurprisingly, this turned out to be more useful.

While traditional scientific methods may appear to offer results that are less open to question, newer theories offer richer solutions. Tasgal describes the science of complexity as “one of the most exciting developments in the scientific arena”.

Albert Einstein once said that “the greatest scientists are also artists”. Grahame MacMullen, senior researcher at RDSi, says that Einstein’s approach is one researchers should emulate: “He made it clear that lateral thinking, chance, intuition and fantasy were some of the most important factors which inspired his theories. Qualitative research is all about looking at the chaotic, the crazy and the contradictory. We just need the space to be allowed to go off the road with respondents, so that we can understand what all the complexity and contradictions are about.”

One approach is to allow consumers to take charge of how they are interviewed. Beauty product manufacturer Simple gave video cameras to a small group, and asked to film themselves in their bathrooms. Nairn, who was involved in the project, says: “It was a cross between Through the Keyhole and the reality shows that have video diaries.” Simple used the findings to move its advertising away from saying what its products do not have (artificial colours, for instance) to saying what their products actually do (such as protect and regenerate). In focus groups, consumers may be loath to admit to believing in beauty products, but peeking inside their bathroom cabinets tells a different story.

Out on a limb

As well as turning to more innovative scientific approaches, many marketers and researchers need to rethink attitudes to risk. As every entrepreneur knows, nothing ventured, nothing gained. Tasgal says: “I have worked long enough in agencies of various hues where the ‘R’ word is one of the great fears hampering any sense of achievement and ambition.”

Confectioner Green &amp; Black’s decided it wanted to change its packaging as consumers were failing to see its chocolate as a luxury product – it was regarded primarily as organic. The company worked with design consultancy Pearlfisher to try out different packaging styles, and as Green &amp; Black’s marketing director Mark Palmer explains, it was happy to try extreme approaches: “You should use research to test more radical routes. That way, you can get consumers to open up. If you test extremes, consumers will react.” He points out that companies cannot expect consumers to tell them what they should be doing, or to fine tune ideas. But if a company is trying something brand new, it is “crazy” not to research it first.

Unless companies take risks, albeit calculated ones, their products will never evolve. Unless marketers take risks, their campaigns will lack sparkle. Brands are based on ideas, not statistics. Tasgal also emphasises the importance of storytelling. He says: “Some of the most eminent thinkers, writers and scientists are also great writers of narratives. The storyteller is a role that I fervently believe is understated in the marketing (and even, shamefully to say, advertising) fraternities.”

The importance of a story starts with the brief. A brief with “a golden thread” of an idea holding it together inspires rather than limits. Too often, though, the brief is overflowing with information and lacks any sort of structure. This is where storytelling can help, says Tasgal: “Exploring brand meanings using the language of narrative and story will pay great dividends. It will also enable the receivers of the research findings (clients or creatives) to respond in a way that they can empathise with, first as human beings and then as marketing professionals.”

Since his paper was published, not all the feedback Tasgal has received has been positive. He says one research company claimed its clients would not buy into unconventional techniques – they only want research that spells everything out to the “nth degree”. Playing safe in this way is to waste the potential of marketing, says Tasgal, who compares marketing to alchemy: “Marketing is perfectly placed at the heart of transforming the base metal of desire into something tangible and desirable.”

Creating gold – whether by inventing a product or communicating differently about an existing one – is the only way for a company to thrive. And the way to have fresh ideas is to be open to new experiences. Too many marketers and researchers are immersed in their own industry and this limits their thinking, says Tasgal. So perhaps it is time to put down this copy of Marketing Week and go out into the wide world…

Clients want us to ensure that ideas with potential are progressed, while non-starters are eliminated early on. But they do not want us to throw the baby out with the bathwater. We know that sometimes a simple modification to an idea can have a highly successful result.

To illustrate, one of our clients – a drinks company operating overseas – wanted a slice of the action in the fast-growing water market. Broadly, the aim was to lend soft drink “cool” to a market that visually lacked excitement.

A wide range of concepts were developed to explore market potential. Some of the concepts were packaging-based, others were name-led. Our client asked us to conduct a screening exercise with two aims: to pick a winner, but also to help it re-engineer concepts that had potential, but might have fallen down due to poor execution. This required a methodology that could both evaluate and diagnose. We designed a quantitative and qualitative study which allowed concepts to be tested, then modified and retested if required.

Insights included discovering that uniqueness was not key to appeal, because in a market already saturated with products that taste the same, it’s hard to find a unique product-based positioning. We also found that the name was of relatively low importance and that concepts that relied too heavily on this were rejected as gimmicky. It became clear that some concepts failed because of name and others because of packaging.

However, in the end, the key was packaging – both in terms of design graphics and shape – and this was really where the opportunity lay for competitive differentiation. But what kind of packaging? In a market where peer-group approval is key, packaging needs to be stylish and aspirational. It has to be something that “my friends would drink” and something “I like to be seen drinking”. Remember, we’re talking water as a soft drink, not a thirst-quencher.

This innovative approach provided our client with a choice of ideas that took the original concepts to a new level and provided opportunities for a successful launch.

David Penn is giving a masterclass on new product development at Insight 2003. This event for buyers and users of market research is running at Olympia 2 on November 25 and 26. Supported by Marketing Week, the event includes more than 120 exhibitors specialising in all aspects of market research. The conference programme covers a broad range of key topics – at Masterclasses, industry gurus discuss case studies and invite discussion, while Strategic Insight sessions look at actionable ideas for improving the profile of research. For further information and a full programme, visit www.insightshow.co.uk