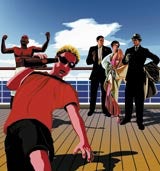 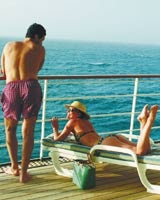 Despite the hellish impression given by recent newspaper headlines, the UK cruise industry, once the refuge of the dicky-bow brigade, is steaming ahead fuelled by significant growth, while the rest of the travel industry is becalmed.

UK cruise bookings are expected to exceed 1 million for the first time, up 14 per cent for 2002 on the previous year. However, to put this in context, 1.2 million visitors stay at Center Parcs’ four UK holiday villages each year, while the total number of conventional package holidays sold is an estimated 21 million.

But the cruise sector is proving robust following the terrorist attacks of September 11, 2001 and, more recently, the war on Iraq, while sales of package holidays are likely to be flat year on year. And the huge size of the package holiday market shows just how much potential growth there is for cruise companies. Traditional tour operators are not blind to this fact and are taking steps to secure a piece of the action for themselves. Thomson Holidays’ parent company TUI is the latest to launch a branded boat, under its Thomson Spirit brand this season.

Globally the cruise industry is forecast to expand from 11.2 million passengers in 2002 to 17 million by 2010, according to a new Seatrade report. This is a revised forecast from pre-September 11 figures, when growth to 20 million was predicted. More new ships are expected to be launched next year, significantly increasing the industry’s capacity and profile.

Several factors are behind last year’s market growth. Oriel Securities analyst Andrew Monk points out that passenger volumes are starting from a very low base, so a natural growth in the market driven by holidaymakers looking for a different experience, can have a major impact.

Other industry insiders say the rise in passenger numbers is due to the cruise industry “getting its act together” over the past decade and realising that “to make cruising appealing, ships have to be holiday resorts in their own right rather than a means of going from A to B.”

Andy Furlong, marketing manager of Island Cruises, a joint venture between holiday operator First Choice and cruise specialist Royal Caribbean, says that people are realising that “the cruise product as a whole is significantly superior to any package holiday” and a broader range of breaks is attracting first-time passengers.

It’s not all plain sailing though, and the cruise industry can still take an unexpected broadside from something as microscopic as the norovirus (MW last week). The virus, a contagious stomach bug, catapulted P&O Cruise’s Aurora onto national newspapers’ front pages recently, with headlines such as the Daily Mail’s “Adrift on the ship of hell”.

And behind the strong figures there are pricing, supply and marketing issues that could create tensions as the industry moves from being a niche holiday option to a mass-market product.

One of these issues is the fact that this year’s impressive passenger figures have been partly driven by deep discounting. Like the tour operators, cruise companies have had to slash prices by up to 50 per cent or more to get people on board. This has worried some travel agents, who believe that new customers attracted by bargains will disappear when prices rise again.

The discounting has also given some first-time passengers the wrong impression about what they can expect from a cruise holiday. Believing they have bagged a bargain holiday, they are shocked by the price of extras once on board, such as drinks and eating in the more exclusive dining rooms. Cruise analyst Tony Peisley says the cruise companies could only afford to give away such discounts because “on-board charges are now a significant factor in their overall revenue”, and he adds: “Some passengers will have been taken aback by the prices and the tipping culture on board.”

Price-cutting has also led to the occasional culture clash between experienced cruisers and newcomers. John Shakespeare, chairman of Leading Cruise Agents, the specialist travel agent trade body, is reported in a national newspaper to have said that discounts have led to a “massive degradation of the type of people on board”. Peisley concurs that there have been isolated incidents on middle-market ships, where first-time passengers have not displayed the expected behaviour. “I’ve no doubt you can get the wrong type of passenger for the more formal cruises too,” he adds.

Some passengers on the Aurora, on finally disembarking at Southampton, have taken pot shots at fellow cruisers, saying they have poor personal hygiene standards and blamed them for the spread of the stomach virus.

The cruise industry also faces the bigger challenge of marketing the cruise holiday to those who have never been on a cruise before, and overcoming entrenched perceptions of it. In the short term, however, the negative publicity surrounding the Aurora, and its effect on the wider industry, has to be overcome. Travel experts, such as Mark Bedlow, director of the tourism group at PriceWaterhouseCoopers, expect little long-term damage. He says: “I believe the incident will knock the sector, but not much. It’s no different from any big outbreak of a disease at a hotel or resort.”

Insiders say the Aurora incident received “disproportionate coverage” because P&O is a leading brand. If the incident had happened on a smaller line, they say, there would not have been such a fuss made. David Dingle, recently appointed managing director of Carnival Corporation &amp; plc, the parent company of P&O, says it is too early to decide if a reassurance campaign is necessary, but the whole of the cruise industry should look at educating agents and passengers on hygiene issues and the norovirus.

The public’s perception of cruising is of a staid affair with formal dinners attended by pensioners in tuxedos, jostling to get the captain’s attention at table and bundling on and off shore with the minimum of interaction with local culture when the ship anchors.

But the cruise industry has fragmented over the past few years to offer a wider range of holiday experiences and this is reflected in each brand’s marketing. Island Cruises, for instance, attempts to appeal to the more discerning end of the package holiday sector and the price of its holidays start at &£750. Managing director Michael Bailey says: “We are a cruise operator and a tour operator and have created a product that can be sold as a package-type holiday.” He says the product offers “an informal family atmosphere” with flexible dining times, a choice of restaurants and no fixed table plans which “fits very nicely with the British mindset”.

Meanwhile, Ocean Village, a P&O venture which experienced its first summer season this year, targets people who want an adventurous, active holiday. It offers activities under the Action Ashore brand that include scuba diving, white water rafting and jeep safaris, and the ship carries a mountain bike fleet.

The company promotes itself as the cruise “for people who don’t do cruising” and has used radio advertising with the voice of “laddish” TV sports quiz presenter Nick Hancock to communicate that idea. Ocean Village head of marketing and communications Gill Haynes says that radio “is a good way of reaching their target market”.

The premium end of cruising is represented by the likes of Silversea Cruises and Cunard. However, even Cunard is taking on board society’s changing attitudes, and according to marketing director for Europe, the Middle East and Africa Stuart Perl, the formal evening-wear dress code, which operates on four out of six nights on board, will be relaxed to two nights from next year.

Cunard launched a new marketing campaign this year that focuses on the experiences and feelings passengers can enjoy rather than depicting the boat, on-board facilities or shore locations. Peter Bracegirdle, a partner at Cunard’s agency TBWA/London, says that after examining the market it was apparent that “communications in this category were talking just to cruisers and that all the advertising was very similar”. To set them apart, the agency developed a campaign with the strapline “float off somewhere”. It has used press and radio advertising and plans to extend to television when the flagship Queen Mary 2 is launched in January.

Sister company P&O has also launched a campaign, created by Miles Calcraft Briginshaw Duffy, which takes the spotlight off the ship and its facilities, instead focusing on the exciting destinations its cruises offer. It carries the strapline: “P&O Cruises. There’s a world out there.”

The new entrants, such as Island Cruises and Ocean Village, are challenging the age range of the typical cruise passenger. The former claims an average age of 45, the latter 43. This is against a traditional cruise age average of 55. But cruise analyst Peisley believes the operators are merely paying lip-service to the idea of more youthful customers because it makes the sector look more appealing.

He believes the average age of cruisers will stay at 45-plus and that there will never be a general move towards the 35-plus demographic. However, he adds, this should not matter because the population is ageing and the former baby boomers, who are now in their 40s and 50s, are keen on self-development and exercise, which makes the new cruise products appealing to them.

With a huge new fleet of ships on the horizon, some cruise operators may be feeling anxious about whether they can fill the places and if they will still need to resort to major discounting. Peisley is upbeat: “How many hotels have been built this year, when the occupancy levels in the sector were dreadful? Plenty. There is short-term downward pressure from world events, that’s all.” Oriel Securities’ Monk is also positive, suggesting that cruise products from tour operators offer holidaymakers a chance to sample the cruise experience and they may then trade up to specialist brands.

With more sophisticated marketing and the backing of travel agents, who can pick up more commission from a cruise sale than a flight-only or package holiday sale, it looks like the cruise sector is set for solid growth.