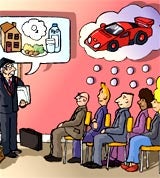 Internal marketing is the latest in a long line of developments which companies have adopted to improve performance. Unfortunately, internal marketing programmes often extend only as far as talking at participants; most stop short of attempting to bring about change in the way people perform at work.

Yet change is vital, because the level of improvement that will be achieved is very limited if everybody carries on in the same way that they always have. The object is to maximise individuals’ performance in their existing roles. To achieve that requires an understanding of the psychology of motivation.

Inevitably, some managers will deride the idea of motivation at work. They believe it is sufficient incentive that an employee can expect to still have a job next month. This approach will only result in a workforce that keeps its collective heads down and does only what is necessary. Staff are not going to do anything that draws attention to themselves and thus are highly unlikely to change their behaviour.

This was explained by Abraham Maslow in his hierarchy of need. Maslow argued that it is necessary to fulfil basic needs such as food, shelter and security of income before more personal needs can be addressed. His theory suggests that motivation can only be achieved when people fulfil the “aspirational” needs within his hierarchy – belonging to a team and distinguishing oneself for a specific skill within one’s peer group.

This idea was taken further by Frederick Herzberg, who developed a theory of motivation at work. He argued that there are “maintenance” factors, such as pay, type of management and working conditions that maintain an employee in a job but do not provide the motivation to work harder or to change. Motivation comes with the factors that Herzberg identified as “motivators”, which include achievement, recognition, responsibility and promotion prospects.

Experiments conducted by another analyst, Bernard Weiner from UCLA’s psychology department, show that, in skill-related tasks, expectancies increase after success and decrease after failure, pointing to the importance of positive feedback being given when tasks are completed successfully. In other words, praise and recognition inspire improved performance.

This means that anyone wanting to motivate people must ensure that they understand those people. Unfortunately, senior managers often believe they understand their workforce without realising that their image may be out of date.

A prime example of this type of misunderstanding comes from research completed for a motor manufacturer, which assumed that the majority of its customers were men. When the market was researched properly, it was found that 70 per cent of decision makers were women.

In another case, senior managers had grown used to the fact that the majority of their sales team was aged 45 and over. They had failed to realise that staff changes over the previous five years had resulted in the average age dropping to 30.

As a consequence of the research, the first company changed the nature of its communications in order to appeal to women. The latter company used further research to identify the issues that were important to younger sales people. It found that factors such as the balance between work and leisure, ecological concerns and the central role of the family were far more important than had been realised. Motivation programmes were adjusted accordingly.

Some companies argue that none of this is relevant. All they want to do is to increase their market share or sales volume, so they just need to know how much it will cost to reach those goals.

While there will always be a need for these more tactical campaigns, even here psychology is important.

At the simplest level, there may be a high turnover among the people who are asked to achieve tactical targets. Consequently, a six month campaign is unlikely to succeed if the sales people are uncertain they will still be with the company half a year later.

Equally, the characteristics of sales staff may mean that they will react best to the “gambling” element that can be built into a “ring in and win” campaign which invites sales people to phone after each sale to find out what they have won.

So understanding the psychology of the target audience is vital in planning the campaign and equally important in selecting the rewards.

For example, in the mobile phone market, vouchers are popular because they provide instant rewards for the sales staff. These people tend to operate in a high-volume, fast-moving market and are likely to react well to the instant nature of this type of campaign.

Giving to the rich

Further up the price scale, merchandise may be appropriate, but it must suit the needs and aspirations of the sales force. If the participants are already earning enough to be able to buy what they desire, what merchandise can be offered that they will want?

And at the top end of the market, people selling high-value contracts for capital equipment are more likely to respond to an aspirational reward such as a Ferrari for a weekend or a travel incentive.

However, few companies will be able to adopt such a simplistic view of motivation. Most distribution channels will have a much more complex structure. The motor industry is a case in point.

In the past the dealer was likely to be the owner of the company. He (and it was usually a man) was probably middle-aged, and would usually have his own money invested in the business. The dealership relied on selling a single product range, so the dealer had a vested interest in maintaining a close relationship with the manufacturer.

There are still many companies like this, a growing proportion of dealerships are owned by plcs. Now, instead of an owner-manager, there is likely to be a young general manager who may be in the job for only a few years before moving to another outlet selling a different marque. Yet the manufacturer still depends on this person to motivate staff within the dealership to sell and support the product. A relationship must be developed in order to create a sense of loyalty to the brand.

The solution is often an integrated package of activities, each designed to appeal to a different target group within the dealership.

At sales executive level, for example, there may be a tactical campaign with short-term objectives.

The sales and service manager elements may involve tactical targets, but will add in qualitative assessments such as Customer Satisfaction Index (CSI) performance.

Dealers themselves are likely to have targets that are long-term and demand consistently high levels of performance across the whole business. Their rewards will be high-profile, and should reflect their lifestyle aspirations.

A programme such as this will be designed around the psychology of individuals as well as their ability to affect different areas of the company’s performance. It may also involve training, if the participants do not already have the skills necessary to achieve their goals.

Continuous communication with each group of participants will also be an important factor, because people need to feel that they are a valued part of the campaign. The psychology of the individual is important here too. Communication designed to motivate a 25-year-old may not be appropriate to a 55-year-old, and vice versa.

But perhaps most important of all is that every participant must see that the programme has total support and commitment from the top. The view of who is at the top will vary, depending on the individual’s position. For example, in a car dealership, the sales executive may view the dealer principal as the top while the dealer principal may consider that the manufacturer’s sales director is the top. Remember the psychology: each participant wants to look good in the eyes of his superiors.

So a motivation campaign aimed at a distribution channel may be relatively complex because of the nature of the different individuals involved.

Yet one of the difficulties of motivation within a distribution channel is that many companies baulk at spending on research to understand the psychology of the participants.

Perhaps the phrase that demonstrates most clearly that companies have a long way to go in understanding how to motivate people in the workplace is the one that is still the first question to be asked, in all too many cases: “Where should we go with the next incentive travel programme?”

This question makes too many assumptions instead of asking the fundamental questions: what are the objectives of the campaign? Who are the participants? What are their characteristics? What is going to persuade them to change the way they work?

Asking which destination should be used may bring about a result, but understanding the motivation of the target and designing the programme to be relevant will bring a much better one.

David Hackett is chairman of TMO