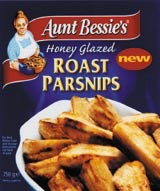 Frozen food brand Aunt Bessie’s is reviewing the advertising account, held by Soul, for its frozen Yorkshire pudding range. The agency has declined to repitch for the business.

The company is understood to be talking to a number of agencies about the account. Aunt Bessie’s spent &£1.5m on adverting last year. It is owned by Tryton Foods, although its potato products are made under licence by Heinz. The Aunt Bessie’s brand extends across a number of frozen-food categories, including pies, vegetables, stuffings and dumplings and desserts. The company recently launched a range of pancakes and is known to be keen to move into other areas of the market.

There has been increased interest in frozen foods this year, following Unilever Bestfoods’ relaunch of the Bird’s Eye brand. Bird’s Eye has just launched a new phase of advertising, created by Bartle Bogle Hegarty, focusing on the quality and freshness of its ingredients.

It is hoped that the campaign will help to position frozen food as still relevant to modern families. Bird’s Eye is introducing a range of vegetables and meals that are cooked though steaming, and children’s ready meals that are low in fat, sugar and salt. Many in the industry hope that, as the industry’s leading brand, Bird’s Eye’s rejuvenation will give the whole category a boost.