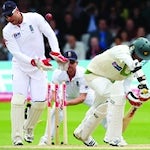 Though sponsorship experts believe it’s highly improbable the likes of PepsiCo and NPower will seek to pull their current deals in the sport, cricket could have a difficult job attracting corporate partners in the future.

There is currently no hard evidence of any wrongdoing but the allegations centre on “spot-fixing” no balls in the fourth Test against England.

“It couldn’t be worse for a sponsor,” says Rupert Pratt, MD at sponsorship consultancy, Generate. He says the issue for PepsiCo, which sponsors Pakistan’s national team, is not people boycotting its products by association – “they won’t” – but the impact on a global corporate scale.

The sponsorship deal with Pakistan’s national team, signed in January and set to run for three years, was chosen because it’s an emerging market and because it’s the most popular national sport.

PepsiCo was unavailable for comment at the time of publication.

For PepsiCo, the real concern is therefore whether people will stop loving cricket. That will also be concerning the International Cricket Council, which boasts PepsiCo, Yahoo and LG among its commercial partners.

“All the corruption coming out of Pakistan will be felt across cricket, so it won’t just affect the commercial deals in Pakistan, it’ll affect deals in the powerhouses of the game like England and Australia [going forward],” adds Pratt.

In the short-term, however, there’s unlikely to be any rash decisions with sponsors remaining “pragmatic and supportive”. Indeed, part of PepsiCo’s commitment with the Pakistan Cricket Board is “to benefit the cause of cricket in [the country]”.

The PCB recently said its sponsors have “stood shoulder to shoulder with the board despite the many unique challenges that Pakistan Cricket has faced”.

Karen Earl, MD at sponsorship consultancy Synergy, says this support from sponsors will remain the case, at least until any investigations by the ICC have been completed. “People in Pakistan are incredibly passionate about cricket, so it wouldn’t do PepsiCo any good to walk away at the first sign of any controversy.”