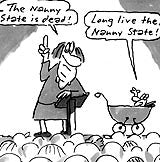 If a week is a long time in politics, two years must be an eternity. Which might explain Tessa Jowell’s loss of memory, but more likely explains her bare-faced effrontery.

Two years ago, in her then guise as public health minister, she summoned a press conference to pronounce the death of the Nanny State. With that lack of any outward sign of conscience or guilt that only politicians and the most accomplished liars achieve, she announced that nannying had been a peculiarly Conservative approach, which Labour rejected. We could only marvel at her cheek.

Here, publicly washing her hands of nannying, was the spokesperson for a government that had just published a green paper (later to be hardened into white), Our Healthier Nation, which was in effect a Nanny’s Primer. It spoke of providing information on the risks of smoking, poor diet and lack of exercise, of the importance of people checking the safety of their appliances, installing smoke alarms, driving safely, wearing seat belts, wearing cycle helmets, not drinking and driving, covering up in the sun, protecting others from second-hand smoke, attending breast and cervical screening, and stopping smoking. If this wasn’t nannying, what was it? Perhaps, with Labour’s penchant for pseudo-marketing, it was a rebranding exercise. Nannying, but not as we know it. New Nannying, perhaps.

At any rate, two years on, we can see exactly what it is. Tessa Jowell, now Minister for Women, is at the heart of a government initiative aimed at making young women bigger and bustier and more assertive and steering them in the direction of jobs in engineering, construction, physics and chemistry.

With an almost intuitive sense of the absurd, the Government managed to announce these meddlesome policies in such a way as to offend an entire profession and make the very process of government look foolish. On June 21, the Prime Minister and First Lord of the Treasury, the Rt Hon Anthony Charles Lynton Blair, will – if he is not on paternity leave – chair a Downing Street summit on ways to relieve the pressure on women to be thin. What with the duty to make the population thinner, whilst at the same time contriving methods to make young women fatter, and not forgetting securing the safety of the nation and maintaining our interests overseas, who would want the seals of office?

As for the requirement to make women more assertive and steer them into engineering, the wisdom or otherwise of that policy was lost in the uproar occasioned by the Government’s dismissive reference to “female jobs” and its urging that girls should “aim higher than hairdressing.” The words had scarcely been uttered and the entire crimping profession rose as one to castigate the slight on its calling. And rightly so. Do these jackasses in high office not know that here, in rebranded Britain, we are justly proud of our reputation as world leaders in hair design? Along with pop singers, frock designers, celebrity chefs, manicurists, and weather girls, our upwardly mobile hairdressers are a universal source of delight and envy. The same was once true of our engineers, but that was long ago. Too long for a revival to be effected by an infusion of aggressive thin girls.

Such was the anger of the hairdressers that RJ Seymour, general secretary of the National Hairdressers Federation, put on record the accomplishments required of a sound practitioner of scissor and tong. “To be successful, the individual needs a range of lifetime skills. In addition, he or she must have artistic flair and ability, personality, presence, colour appreciation and dexterity and be truly competent and knowledgeable in the cutting, styling, waving, perming, colouring and straightening of hair. In short, a rounded, competent, balanced and highly trained intelligent person.”

If that is true, Tessa Jowell should take a course in cutting, styling, perming, etc. At the end, if she emerges a rounded, competent balanced and highly-trained intelligent person, she might be fit for office and able to see how unwelcome, wasteful, self-indulgent and babyish it is bossing people around in order to indulge one’s own sense of self-importance.

This is not a party political point. The tendency to nanny may be more imbued in Labour’s blood but the Conservatives are not immune. As health secretary, Virginia Bottomley went further than ever before, setting targets for cutting smoking, drinking and obesity, and laying down guidelines for exercise and diet, even specifying how many egg-sized potatoes constituted a desirable daily intake.

There is something deeply offensive in the conviction held by some people – politicians, lobbyists, fanatics of every hue and stripe – that they know better than the rest of us what is good for us.

They seek to deny us the right to follow experience wherever it may lead us. Green papers, white papers, summits, campaigns, reports, rules, regulations, laws, little by little they destroy our capacity to run our own lives. And it is that capacity which defines freedom.