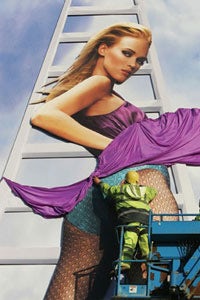 It’s not every day that you see a blonde model with 23-foot legs nonchalantly flashing her knickers at passing traffic. But, for two weeks in November last year, Polish model Anna Tokarska gazed down on drivers from a 64-foot billboard on the M4 Chiswick roundabout as part of a Pretty Polly advertising campaign called “Stairway to Heaven”.

The billboard – from Clear Channel Outdoor’s Create division – stood as tall as a six-storey building and was the largest of its kind in the UK. “We wanted an image that was striking and would create ‘talkability’ through its impact,” explains Pretty Polly commercial director Sue Clague.

Getting noticed
“These days, there are so many streams of media fighting for attention. Large format offers impact, cut-through and stand-out,” claims Mark Pearson, creative director at direct marketing agency TDA.

“Large format brings added kudos to a campaign,” adds Rob Atkinson, group sales director at Clear Channel Outdoor. “It has brought governments down [referring to the Conservatives’ ‘Labour isn’t working’ poster] and given personalities to brands that didn’t exist before, such as the Marlboro Man.”

With an estimated 2 million vehicles a month passing some of the most popular outdoor sites, large format has the potential to reach a wide audience. The question is how can advertisers use the medium to engage and appeal to consumers?

“The biggest mistake a brand can make is simply to enlarge an execution that has worked successfully elsewhere,” says TDA’s Pearson. “Large format requires an imaginative, but relevant, response to where it will appear.”

One of his favourite examples – and one of the most successful, outdoor ads in recent years – was Blow Up Media’s campaign for BMW’s Mini. The ad showed a 3D replica of the Mini appearing to drive up the building on which the ad featured, accompanied by the strapline “It’s a Mini adventure”.

Many other ads have used 3D to create a strong visual impact: the skirt the model was wearing on the Pretty Polly billboard was 3D and billowed upwards whenever there was a gust of wind, for example.

Paul Shields, UK managing director at print production company Hi Resolution, says: “A simple investment in producing something that stands out – from a visual and physical point of view – can help you achieve a hell of a lot more in terms of brand awareness.”

Hi Resolution worked with Blow Up Media and MindShare, on behalf of client Unilever, to create a specially created poster site for its Sure for Men anti-perspirant. The banner site, at Aldgate roundabout in east London, featured a giant image of the anti-perspirant canister, which was held down by four 3D, 18m-long chains to convey the strength and power of the Sure product.

On location
Sometimes 3D ads can create the wrong impact, however. In January last year, large format posters advertising Ikea in Edmonton had to be removed after some concerned passers-by mistook life-sized mannequins, on top of the 25 metre-high billboards, for real people.

The location of a site can also cause problems when assembling 3D ads, points out Hi Resolution’s Shields. “It can be very difficult to put up big 3D displays, and you need room for cranes,” he warns.

But large formats don’t always need to stand out physically to create an impact – the way they are presented can sometimes be just as visually appealing. Microsoft Windows Vista’s launch in February, at Centrepoint in London, used lightbulbs to spell out the word “wow”, and created an impact by splashing its message across three adjacent billboards. This was the first time outdoor specialist Ocean Outdoor had allowed an advertiser to use the three sites at Centrepoint simultaneously.

Technology also offers marketers new possibilities. Bluetooth sensors have been tested in some billboards, which can activate lights on the poster or trigger other actions. Blow Up Media boasts about its “electric paper”, and UK managing director Malcolm Brasseur cites the example of an ad it created in Germany to promote an iron that appeared to blow steam onto the street.

But he warns against using technology for technology’s sake. “The ad for the iron was playing on one of the product’s USPs – it provided more powerful steam – so there was genuine value in demonstrating it in this way. But what we’re not receiving are campaign briefs saying, ‘I’ve got no idea, I just want something novel’.”

Novelty factor
As well as considering the creative work, marketers need to consider the location of their ad to ensure it works to their best advantage. “It’s about catching as many people on the move as we can,” says Clear Channel’s Atkinson.

“There are also opportunities in areas that are perhaps perceived to be dead areas,” points out Graham Clark, managing director of print company McKenzie Clark. “We created a project for BAA that used the corridors at London Heathrow airport, from the arrival area through to customs and baggage pick up. It was a successful use of large format in an often-overlooked area,” he says.

EasyJet uses its planes to promote its call centre number. “For that brand, it’s appropriate,” says TDA’s Pearson. Train companies have also used large-format advertising on the outside of carriages to promote their services.

Large format works best as part of an integrated marketing campaign. “The clever, creative ideas generally work across all media,” agrees Hi Resolution’s Shields. “Quite often a lot of clients use TV to get their message home, then use outdoor to hammer home that message over two weeks.”

Specially created sites – such as the 64-foot Pretty Polly billboard – can generate a PR campaign in their own right, which can help recoup some of the investment involved in creating the large format in the first place. “We always expected ‘Stairway to Heaven’ to have a fantastic impact, but even we were shocked by the amount of debate the ad inspired,” agrees Pretty Polly’s Clague.

It’s also becoming common for large formats to be used by developers to promote the building that the ad is covering up. “You’re doing a public service,” claims Blow Up Media’s Brasseur.

Communication issues
Advertisers need to be aware of any restrictions when advertising on buildings, even if they are under reconstruction. For example, Ocean Outdoor has secured the first outdoor advertising site in Trafalgar Square, but its location – on St Martin-in-the-Fields church, which is being renovated – prevents it from advertising alcohol, junk food, gambling or politics.

The solution is always to engage with everyone involved in a campaign. “Where possible, try to have a conversation with clients, agencies and specialists to suggest ideas,” says Ocean Outdoor’s Cox.

Some agencies, such as Clear Channel, can pre-test large format campaigns for marketers to see if it works. McKenzie Clark also recommends paying particular attention to site surveys to ensure ads fit the allocated space.

Sorting out such logistical issues will ensure the campaign is delivered correctly. But there’s unanimous agreement that what ultimately makes large format work is the creative. Clear Channel’s Atkinson sums the matter up when he says, “It doesn’t matter how big the billboard is, if you have poor creative, the campaign simply won’t work.”