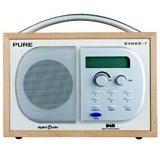 The activity, backed by BBC and commercial radio chiefs, pushes the messages that “digital radio gives you more of what you love about radio” – namely extra content and digital features, such as internet radio and iPod docks – hence makes the “perfect Christmas gift”.

Comedians David Mitchell, Arthur Smith, Hugh Dennis and Sue Perkins will appear in the AMV.BBDO created advertisements to run across commercial and BBC stations from 22 November to the new year.

Digital Radio UK, the body set up to encourage digital radio sales and facilitate expansion of the digital radio platform, will be hoping the campaign creates enthusiasm for digital radio among the public, amid recent signs that interest in the medium is flagging.

Half of all radio listening must be via digital devices by 2015 if the Government’s target of a 2015 switchover from analogue, as set out in July’s “Digital Radio Action Plan”, is to be achieved.

In the third quarter digital’s share stood at 24.8%, according to Rajar, an increase of just two percentage points from the 24.6% registered in the second quarter.

However, despite sluggish growth in the third quarter, digital radio listening has grown by almost 20% this year, with over 20 million listeners in 35% of all homes, Rajar data shows.

Radio chiefs are hoping that the launch of commercial digital-only services including Absolute 80s, Absolute Radio 90s and Smooth UK this year will help boost migration to digital devices.

It is also hoped that the BBC’s plan to extend coverage of its digital services nationally, the launch of Radio 4 Extra next year, and the newly popular 6Music, which saved from the axe earlier this year, will accelerate take up.

Andrew Harrison, CEO of RadioCentre, says of the campaign: “2010 has been a milestone year for commercial digital radio with the passage of the Digital Economy Act and the launching of major new national commercial radio stations.

“We know listeners love digital radio and we believe that the Christmas campaign will help to accelerate the momentum towards digital radio switchover.”