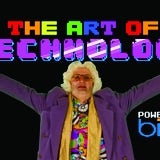 Bing UK’s head of search Alex Payne says the aim of the webisode series is to promote awareness and perception of the brand in a “more engaging and entertaining” way than Bing’s previous marketing campaigns.

Payne adds: “Early indications, in response to a number of teasers on Facebook, Twitter and with key influentials about the campaign, suggest the webisodes will go viral over the following days.”

Payne says Facejacker fans are “eager” to find out what is next for its star Kayvan Novak.

In the web series, titled the Art of Technology, Facejacker’s eccentric art critic character Brian Badonde (pictured) visits and interviews several Bing experts, unaware he is not a real journalist chasing a series story. The first instalment launches at 9.30am today (13 January) on dedicated microsite theartoftechnology.co.uk.

The initiative has been created by JWT Entertainment and Hat Trick Productions.

Now in its second year, Bing says it has over 17 million users.