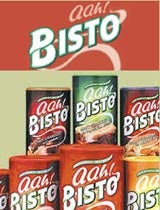 Centura Foods is reviewing its £2m Bisto advertising business held by Saatchi &amp; Saatchi as part of a wide-ranging review of its brands.

This week it emerged that the company is running a series of pitches across its creative disciplines, including advertising and design.

Centura marketers plan to visit eight advertising agencies, with a view to choosing four to pitch for the Bisto account. Saatchi, which has held the business since 1999, has been invited to repitch. The company intends to make an appointment in May and the pitch is being handled by Agency Insight.

Bisto has struggled to find a campaign matching the popularity of the iconic Bisto Kids, which were axed in the mid-Nineties. The Ahh Bisto strapline was reintroduced by Saatchi when it won the business. A recent television ad campaign featured Liz Smith, the grandmother from TV show The Royle Family, pretending to be pregnant to get the gravy from her husband.

TBWA/London, which handles the Sharwood’s Food Range, is understood to have been reappointed to handle the Indian food brand which relaunched last year with new packaging, jar design and advertising.

The reviews are being overseen by Sue Knight who was appointed to the position of brands director earlier this month after former post holder Ginny Knox became the company’s managing director (MW March 6).