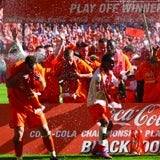 The club has been buoyed by the better than expected start to their first ever season in the Premier League, the team is currently sitting 13th in the table, and now wants to exploit the opportunities global media coverage of the league brings.

It is thought that the club is open to renaming the stadium entirely or to a version of the current name, which has been the club’s home since 1901.

Blackpool would be the fourth Premier League ground to currently carry a brand’s name alongside Arsenal’s Emirates, Bolton’s Reebok and Stoke’s Britannia stadium, with several others thought to be considering the option to drive revenue.

Chelsea, Spurs, Sunderland and Blackburn are all reportedly looking to sell rights.

Clubs need to be wary, however, of a supporter backlash. Newcastle United owner Mike Ashley incurred the wrath of fans in 2009 when the club’s St. James’ Park stadium controversially switched to sportsdirect.com@St James’ Park Stadium for part of last season, while reports that previous owners Tom Hicks and George Gillett were looking to sell the right to brand Anfield met with protest from Liverpool fans.

Blackpool’s owners, however, believe a stadium sponsor is essential to bolster the club’s commercial position.

In a statement the club says: “With one of the smallest grounds in the Premier League, it’s the club’s responsibility to maximise the potential of all available commercial opportunities, in order to continue developing the stadium, strengthening the squad, and establishing the facilities that will help to ensure Blackpool Football Club continues to compete in the best football league in the world.”