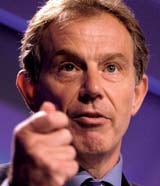 It is the first time the prime minister has called the industry together to discuss the digital switchover, in a meeting said by insiders to underline the Government’s concern about meeting its 2012 deadline. Representatives from Panasonic, Sony and Alba attended, along with charity leaders and Digital UK, the body co-ordinating the analogue switch-off.

At the meeting, Blair said: “Digital switchover is the right policy for Britain and we are delighted it has the support of the industry,” and reiterated the BBC’s “crucial role” in building a digital Britain. The BBC will fund the Targeted Assistance scheme, which will help older people and those with “significant” disabilities to make the switch.

â¢ Digital UK has revealed that up to a million people are set to convert to digital television ahead of the 2006 World Cup. The not-for-profit body announced earlier this year that it was to bring forward a national campaign to May, following pressure from manufacturers wanting to leverage World Cup appeal. The survey, conducted by BMRB for Digital UK, shows 15% of the remaining 7.5 million households without digital TV plan to convert before June. It follows this week’s announcement by the Department for Culture, Media and Sport that 70% of UK households can receive digital broadcasts from at least one TV set.

Digital UK predicts that 80% will have access to digital multi-channel television in 12 months time.