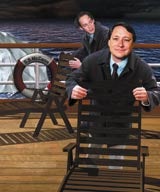 The world’s largest advertising network, McCann-Erickson, has not had an easy ride over the last year. Its European division is still at the centre of an investigation by US financial regulator the Securities and Exchange Commission into accounting irregularities at holding company Interpublic Group, and its high-profile London office has been hit by a series of management reshuffles, client defections and account reviews.

Former McCann-Erickson UK chief executive Tamara Ingram was ousted in January by the agency’s then chairman Ben Langdon (MW January 15). Langdon himself was given the push several months later, leaving the agency without anyone at its helm (MW June 26).

In August, the company lured HHCL founder Rupert Howell to replace Langdon as president of McCann-Erickson for Europe, the Middle East and Africa and chairman of the UK group of McCann-Erickson companies (MW August 7). He has a job on his hands. The London agency – Howell’s most important task – has been dogged with problems. Not only has it been unsettled by the departures of Langdon and Ingram, it is also facing a number of reviews by key clients. It is described by one agency chief as “the ugly agency”.

The trouble with triples

The three now face a triple task: stopping the flow of clients out of the agency’s door; improving its creative reputation; and restoring its dignity following the launch of the SEC investigation into IPG’s accounting irregularities ($120m (&£70m) of which reportedly originated at the European division of McCann-Erickson Worldwide, which is based in London).

McCann is a tough place. Those in advertising who are close to Langdon say that to this day he does not know exactly why he was really fired. Langdon ruled the agency for five years, during which time he dragged it up through the ranks in terms of billings, notching up just short of &£300m in 2002 – which made it the UK’s second-largest agency by billings. He was at the helm when the agency came out top in Marketing Week‘s Agency Reputations Survey last year (MW February 27). But he was not a popular boss, and insiders say he ran the agency by fear.

Langdon was hired in 1998 by former head of McCann-Erickson Worldwide Jim Heekin, who was ousted in February. Langdon did not get on with Heekin’s replacement, John Dooner and was supposedly fired after he suggested that McCann-Erickson in London should be renamed McCann-Langdon.

The agency’s troubles with the SEC stem from McCann Europe, which was apparently treating internal invoices between offices as income, when in fact they were just transfers from one part of the organisation to another.

Howell, who is a master of spin, claims that the investigation has been concluded: “The SEC has finished investigating, and no individuals are being investigated. All it means is that we will now be audited quarterly.”

However, others in the industry contradict this, saying IPG is still being investigated by the SEC and its findings could still result in the prosecution of several former and existing McCann-Erickson executives.

Not surprisingly, rather than talk about IPG’s accounting woes – which relate to a period when he was not working at the company – Howell is happier to explain what he wants to do in his new role. “McCann in London is the exception, not the rule,” he says. “New York is a hugely respected agency, as are Ireland, Italy and Spain. But for any network you need New York and London firing on all cylinders.”

While the London office may have plenty of lucrative international business on its books, its domestic business has been a problem.

Somerfield has recently moved its &£6m creative account out of the agency and into M&C Saatchi; McCann’s place on the Coca-Cola roster has also come under threat following the appointment of Mother to handle advertising for the main Coca-Cola brand (MW September 25); and the agency is facing reviews of its &£22m Unilever Birds Eye business, its flagship &£50m global Bacardi Breezer account and its &£10m global Glenfiddich account. In addition, the agency will learn this week that brewer Greene King is also reviewing its &£2.5m account.

Think of it as a different kind of expansion

Howell says recent reports of client defections and reviews have been “massively” overstated. He claims that, even if the agency loses the Bacardi Breezer global business, McCann will continue to create the UK advertising and will not be forced to adapt advertising created by another agency, a scenario which insiders claim is hard to believe.

Howell says the Somerfield business “was a nightmare” and the fees paid by the supermarket were not worth the agency’s time. He says McCann is doing everything it can to save the Birds Eye business, the review of which was announced last month (MW September 11). But industry insiders claim the frozen food company has had a “gut full” of the instability at the top end of McCann’s management and that the agency is unlikely to retain the business.

Howell adds that recent speculation that the agency has lost out on the Coca-Cola roster is “nonsense”, pointing to the fact that McCann is doing some idents for the brand. He also mentions in passing a dinner with the president of Coca-Cola, a reference which fits in with Howell’s reputation as something of a name-dropper, who has never been shy of publicity. He is a confident man who, according to critics, has a big ego – with some claiming he is arrogant.

“He does have extreme self-confidence,” says HHCL/Red Cell creative director Steve Henry, who started HHCL with Howell. “But if he was self-obsessed he wouldn’t be so sensitive to others’ needs. Those who have worked with him love him.”

Henry worked closely with Howell for more than ten years, until HHCL was bought by Tim Bell’s Chime Communications for &£24m in 1997. Howell moved across to become chief executive of the communications group, becoming less involved with the ad agency he founded.

After leaving Chime last year, Howell tried to launch a consultancy called the Growth Organisation. But following a blaze of publicity, which included a huge spread in Management Today entitled “Rupert Howell’s 10 steps to start-up”, the launch was aborted after Howell – along with his long-term friend Robin Price and Piers Schmidt from the defunct Fourth Room – failed to find funding.

Howell’s critics say he will be happy to be a front man, “smiling to the cameras”, but add that he is unlikely to put in the really hard work that is required to turn McCann around.

“Those who say that can’t know me very well,” says Howell. “I become too embroiled in the detail and I can be in danger of missing the bigger picture.”

Last year, Howell ditched his house in Chiswick for a country pad in the Sussex countryside. Some of Howell’s peers suggest that it is in order to hang on to this country pile, which comes with a large mortgage, that he took the job at McCann.

“I give him 18 months at McCann. He’ll pocket a couple of million and then disappear. It’s merely a marriage of convenience,” says one agency boss.

Howell admits that the house comes with a helipad and stables, but claims to use neither. He also denies that he took the McCann job in order to hang on to his home.

“I am extremely wealthy,” says Howell. “I have a lot of stocks and shares and I didn’t spend much after the HHCL sale. I’ve invested my money and I have four or five pensions. I’m half-Scottish, so I get my caution with money from my mother.” While admitting he wants to be comfortable, Howell, 46, claims he could still keep his house if he did not work again.

Baring the soul to Rupert

And while Howell does have his critics, there is a long line of senior industry figures – including Banks Hoggins O’Shea/FCB chairman John Banks, Bartle Bogle Hegarty chief executive Nigel Bogle, the AAR’s advertising director Martin Jones and David Wethey, the managing director of Agency Assessments International – who believe he is one of the best executives the advertising industry has to offer. “His ability to talk business – beyond the world of advertising – means clients are happy to talk to him about their business as a bigger picture,” says Wethey.

Now ensconced at McCann, Howell has brought in Campbell – described by industry observers as a “truly great” hiring – and one of adland’s most famous creative directors, who has been behind well-known campaigns for Virgin Atlantic and The Times newspaper. Having just completed a four-year earn out following the sale of Rainey Kelly to Young &amp; Rubicam in 1999, insiders say Campbell had become disillusioned with advertising and was “miserable” at his former agency, where he had fallen out with chairman MT Rainey. Howell says Campbell has the rare ability to be an “outward-facing” creative who will talk to clients.

The least-known member of the new management team is Robin Price. Trained as an accountant, he left his job as a video facilities manager to join the advertising industry, ending up as a founding partner of HHCL in 1987.

“Robin keeps a low profile,” says Steve Henry. “He acts as an adviser to Rupert and I have never known him to become flustered”.

McCann may not be in real danger of sinking, but it is in desperate need of a strong London office. Howell says his sleeves are “rolled up” and he is ready to put in the work necessary to turn around the UK operation. The jury is out on whether Howell will be successful in cracking the brief, but if he does then industry figures say he could end up taking over from Dooner when McCann’s chairman and chief executive retires in the next five years.