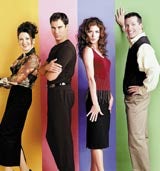 Channel 4 has signed up wine brand Blossom Hill to sponsor the third series of US comedy show Will &amp; Grace in a deal worth &£850,000.

Blossom Hill marketing manager Emma Chamberlain says: “The show is about friendships and loving. It is a new breed of grown-up, witty, contemporary comedy and is perfect for Blossom Hill.

“The break bumpers will be seen by exactly the right market for us, so it’s a mutually beneficial partnership.”

The wine brand has taken a similar strategy to rival Jacob’s Creek, which has sponsored US comedy Friends in the past.