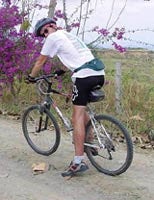 Thanks to BlowUP Media’s regional development manager Harvey Glenn, the company is now famous across Equador.

Harvey cycled over the Andes dressed in bespoke BlowUP corporate kit “just in case there were any media buyers lurking in the forest”. Yes, the recession has hit that hard.

But there was a reason for it – his workmates needed a break from him. But seriously, Harvey raised &£3,500 for MacMillan Cancer relief.

“At least it made a change from Birmingham,” says the company – which suddenly puts the whole thing in perspective.

“The main test was the heat and humidity,” says Harvey, presumably referring to Equador rather than BlowUp’s office. The Diary looks forward to BlowUP setting up an office in the area. Only keen cyclists need apply.