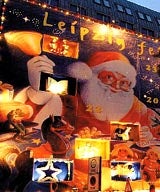 BlowUP Media UK, the poster contractor, is looking for companies to advertise on the UK’s first giant advent calendar poster.

The site on the facade of Birmingham town hall, which is being refurbished, offers advertisers 24 three-dimensional illuminated windows during the run-up to Christmas.

BlowUP pioneered the use of the giant advent calendar poster in Leipzig, Germany, where it has run for the past five years and has been used by retailers, fragrance brands, car and telecom companies.

Sales director Jonathan Tasker says: “BlowUP has succeeded in the UK because we have brought poster agencies, advertisers and creatives a dramatic new way of reaching a huge number of metropolitan consumers.”

The German-based company plans to open companies in France and Spain (MW August 9).