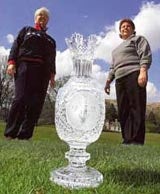 The Evian Ladies European Tour golf tournament has secured &£3m sponsorship from a number of blue chip companies backing next year’s Solheim Cup, making it the most commercially successful since its inception in 1990.

Volvo, HP Invent, Hilton Scandic Hotels, ForeningsSparbanken, PricewaterhouseCoopers, American Express and SAS have all signed up to sponsor the tournament. In return, they will be given branding on the course, hospitality, use of logos for marketing purposes and live television exposure. The competition will be shown live on Sky Sports in the UK.

The Solheim Cup is the women’s equivalent of the Ryder Cup. Because of the events of September 11, last year the Ryder Cup moved from 2001 to 2002 and then to every other year after that. As a result, the Solheim Cup is going to be held on consecutive years, 2002 and 2003, before reverting to its biennial pattern. The tournament is to be played out before more than 100,000 people from September 12 to September 14 at Malmo in Sweden, which will be the first time a European staging of the tournament will have been played outside the UK.

The Ladies European Tour (LET) started out as the Women’s Professional Golf Association in 1978, but its members voted to separate and form an independent company.