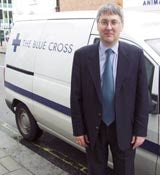 The Blue Cross, the animal welfare charity, has appointed Tony Samuel, the deputy director of fundraising at the Royal National Institute for Deaf People (RNID), as marketing and fundraising director.

Samuel has worked for the RNID for more than two years and prior to that spent a similar time at Oxfam as donor recruitment manager. Samuel has also worked in the agency world, spending nine years with Brann and a spell at Wunderman Worldwide. He started his career as a graduate trainee at Dairy Crest, where he was involved in marketing and new product development.

He replaces Jim Swindells, who left earlier this year to join the Ethnic Minority Foundation as director of marketing and fundraising (MW August 22).

The Blue Cross has just completed a strategic review that resulted in a commitment to new developments in its education and advocacy work. Despite needing to raise &£15.1m to maintain its current level of service, the charity intends to upgrade facilities at adoption centres and hospitals.

The Blue Cross was established in 1897. At its inception it was primarily concerned with the welfare of working horses in London. In more recent times, the growing number of household pets has led to a greater emphasis on meeting these needs.