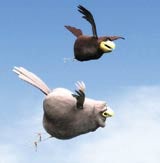 Bmi head of marketing Amanda Burns is leaving the company at the end of the month after taking voluntary redundancy. She does not have a job to go to.

The airline’s commercial director, Adrian Parkes, will take over her responsibilities, and will oversee the marketing operation before deciding whether to appoint a direct replacement or restructure the department.

After Gregory’s departure the company ditched the role of marketing director and appointed Parkes as commercial director, overseeing the marketing and sales divisions. The airline has independent marketing divisions in its overseas markets, which are strategically led by the UK department.

Parkes denies speculation that bmi is looking for an ad agency to replace incumbent Euro RSCG on its £6m account. The agency has handled the accounts for bmi and bmibaby since its merger with Partners BDDH in 2003.

Bmi, which is the UK’s second-largest full-service airline, is overhauling its service and pricing structure. The changes include dropping business class on all flights on its core business routes to Glasgow, Edinburgh, Belfast City and Brussels.

Media Contacts has won the £3m online media buying business for lottery operator Camelot. The appointment follows a six-way pitch, which is thought to include Agency Republic, Unique Digital and OMD Digital and the incumbent Tribal DDB The move has consolidated the digital media business into Media Contacts, which previously handled the online planning contract, […]

Chime Communications, the marketing services holding company run by Lord Bell, is planning to buy ad agency Vallance Carruthers Coleman Partners as it seeks to boost its presence in above-the-line advertising, according to a source close to negotiations. It is understood that a deal will be unveiled shortly, though neither Chime chairman Lord Bell nor […]