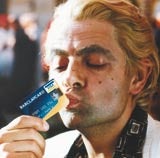 Barclays has moved its &£6.5m Barclaycard advertising account from BMP DDB to join the rest of the bank’s business at Bartle Bogle Hegarty.

The move ends a 13-year association with BMP. The agency was responsible for the Rowan Atkinson ads of the early Nineties, which inspired the recent film Johnny English.

The decision follows hard on the heels of the recent uproar over comments made by Barclays chief executive Matt Barrett. He was unable to explain Barclaycard’s “0 per cent offer” to MPs and was accused of “barefaced cynicism” after saying credit cards were too expensive.

A spokesman for Barclays denies the change of agency is linked to Barrett’s remarks and says the aim is to integrate Barclaycard’s marketing with the parent bank’s Fluent in Finance campaign.

This month, Barclays announced it was transferring sponsorship of the Premiership from Barclaycard to the banking brand in a &£57m deal (MW October 9).

The Barclaycard account was worth about &£30m before the money was redirected into football sponsorship.

The bank has also announced it has appointed Sara Deeks as brand strategy director, following Caitlin Thomas’s resignation two weeks ago (MW October 2). Deeks was customer insight director and Barclays is looking for a replacement.

In June, Barclaycard consolidated its media account into Starcom Motive (MW June 26). OMD UK had shared the account with Starcom.