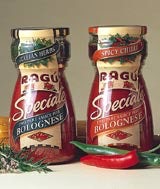 Unilever Bestfoods has appointed BMP DDB to handle the advertising for its Italian sauce brand Ragu. The work moves from Ogilvy &amp; Mather.

This forms the final part of Unilever’s £200m global review, which was announced a year ago. The move was sparked by Unilever’s acquisition of Bestfoods in August 2000 (MW August 10, 2000).

Colman’s Cooking Sauce and Colman’s Mustard range has also been passed to BMP, from J Walter Thompson, but the spokeswoman says there are no immediate plans to advertise the brand.

BMP’s appointment means that four agencies handle the Bestfood’s portfolio of savoury dressing brands in the UK. These are BBH for Bertolli, Lowe for Hellmann’s and Peperami, HHCL for Pot Noodle and BMP DDB for Knorr, Chicken Tonight, and now Ragu and Colman’s.

Unilever’s move will come as a relief to BMP, after it was revealed last week that the agency has plummeted from second to 11th position in the billings league, according to the latest AC Nielsen figures.

According to AC Nielsen, Unilever last advertised Ragu in 2000, with a budget of £1.8m. It is understood that BMP will be briefed within weeks to come up with a new advertising campaign to break later in the year.

The brand’s competitors include Masterfoods’ Dolmio and Princes Food’s Napolina.