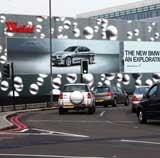 In a media first, Ocean Outdoor has transformed its premium digital banner at Holland Park Roundabout for the launch of the BMW 5 Series.

In addition BMW swill use Ocean’s Media Wall in Liverpool, the largest commercial digital advertising screen in Europe, and their latest banner in Manchester.

The ’special’ has created a customised platform from which BMW could launch their 5 Series model, enhancing the three high specification digital screens that BMW took complete ownership of for the two weeks of the launch. The site is normally sold to multiple advertisers in a 40 second loop.

Paul Hutchison, managing partner at Vizeum, says: “BMW wanted to utilise premium formats such as Holland Park Roundabout & Liverpool Media Wall to showcase the new 5 series. Not only do these sites have the scale and impact necessary to communicate the prestige of BMW they also have the opportunity to fully wrap the sites to create even more standout and with fully animated copy in Liverpool.”

A shopping centre deal has also been planned by Limited Space, Posterscope and Vizeum and will run across giant screens of up to 110 sq/ft with full audio in selected shopping centres including Cabot Circus and Liverpool One.

The shopping centre screens will aim to highlight the aesthetics of the new car across the large digital screens and are targeted at malls with the highest overall footfalls and concentration of high-earning men to make sure the ads were as targeted as possible.

Matt Gordon, managing director, Limited Space, adds: “Although men don’t generally dominate the mall environment the footfalls are so high at these malls that even looking at percentages these ads will still achieve a really concentrated audience. The impact of the screens coupled with their size, sound and picture quality means the ads can’t be missed.”