Designing a marketing campaign with the potential to change society is no mean feat, especially when your vision pushes the boundaries of regulation and challenges accepted social norms.

This was the experience of Essity’s global marketing and communications director Martina Poulopati Gerhard, who is responsible for sanitary brands Bodyform/Libresse.

These brands were built on the insight that women typically have lower confidence than men, the logic being that if you arm them with the right products and give them a sense of positivity, women can be fearless.

However, once Poulopati Gerhard and her team started to probe this logic they realised that the reason women start to feel less confident is a result of the taboos that exist in society around female sexuality and body image.

“It was fairly obvious that if we want to help women become more confident we have to actually do something about it, rather than point the finger at them and saying ‘go out there and live fearless’,” Poulopati Gerhard explained on stage at the Festival of Marketing.

She marvelled at the fact that her products – sanitary towels, tampons and panty liners – are labelled as “taboo products” in the first place. However, she acknowledged that these taboos were being fuelled by the industry, which perpetuates the problem by showing a blue liquid, instead of blood, in its advertising.

That is where Essity’s ‘Blood Normal’ campaign comes in. Devised by creative agency AMV BBDO, the campaign’s ambition was to show the reality of periods and normalise the experience for women.

However, the choice to show blood, rather than a generic blue liquid, sent shockwaves through the industry. Clearcast, the body which clears adverts for broadcast in the UK, ruled the campaign had the potential to cause widespread offence and wouldn’t allow it to air.

How Bodyform took the ‘toxic shame’ out of periods

Poulopati Gerhard could see that an ad which broke taboos and challenged perceptions of what is believed to be acceptable could cause friction, but this was nonetheless a blow.

“It pissed us off and I was close to losing my job and binning the campaign,” she recalled. “Then AMV BBDO basically said ‘we’re not going to do that, we’re going to use the ban, we’re going to put it on the ad and tell people that periods are normal’.”

Getting broadcast sign-off was crucial, not because the team wanted to “tick the box of creating an effective media plan” but because Bodyform wanted to get its message out to as many people as possible.

Poulopati Gerhard insisted she never saw Clearcast as the enemy and while the Blood Normal ads were initially banned by Google, she described the social media giant as acting as a partner. Facebook, on the other hand, proved to be a “significant issue”.

“They have a policy which is completely decentralised. They just ban things without even thinking about it. They tell me campaigns are pornographic and designed for sexual pleasure, my products are adult products and services. It’s all over the place,” Poulopati Gerhard argued.

“If we cannot bring a positive message of empowerment for women in the media, what world are we living in? We allow violence, rape, crime and blood to be splattered all over mainstream TV stations and that’s OK.”

Despite feeling at times like giving up on Blood Normal, especially when opposition to the campaign was at its fiercest, it really helped having “the world’s most stubborn agency” at her side, she said.

“They are extremely passionate about our purpose and they never let me stop and they never gave me a chance. Sometimes I hated them for it and sometimes they pissed me off but they were always right and I think that’s really important,” Poulopati Gerhard explained.

“Partnering with the right people and creating a network within your company, or outside your company with agencies that believe in the same thing, it helps keep you up when things are getting dark.”

Such was the power of Blood Normal that it generated acclaim globally, winning Essity a Glass Lion for Change Grand Prix at the 2018 Cannes Lions Festival of Creativity.

Two years later came the launch of ‘Viva La Vulva’. Devised by AMV BBDO to celebrate vulva diversity and eradicate social stigma, the campaign scooped a host of awards at the 2019 Marketing Week Masters Awards, including the accolade of Diversity and Inclusion Champion.

This time, Bodyform worked closely with Clearcast to ensure the campaign could be broadcast in the UK, before rolling it out to other European markets.

Poulopati Gerhard wanted both Blood Normal and Viva La Vulva to spark conversations globally, which inevitably meant some negative comments. Rather than running away from the criticism, the team decided to embrace the negativity and watched as Bodyform’s impassioned community came to the defence of both campaigns.

“A lot of people who were naturally supportive of the ‘Blood Normal’ campaign started responding to the people who were negative about it and we saw the same happening with Viva la Vulva,” Poulopati Gerhard recalled.

“We had a fantastic case in Sweden where a woman said, ‘This is shameful and it should be taken off air’ and she got such a big backlash with so many positive comments which challenged her thinking that she had to say ‘OK I get it’. That’s a dream, because you’re allowing the conversation to happen and the people who believe in your brand and your message to fight for you.”

She argued that it is up to brands to continue pushing the boundaries because they owe it to their customers to drive change and challenge what is considered acceptable, in order to move things forward for women.

Poulopati Gerhard also encouraged marketers to think about their own value system, not just what relates to their brand, as this kind of personal passion will drive them further. She can see that it could be tempting to leave a mainstream brand for an NGO or startup in order to achieve this, especially as making changes at a big corporate can prove challenging, but that would be a mistake.

“What I would say to all marketers is, don’t do that,” Poulopati Gerhard advised. “Don’t give up. Fight for it and use your mainstream brand, because you have a platform, which NGOs and startups don’t, and that gives you not only the responsibility to act on it but also the potential to really drive change at scale.”

The feminine hygiene brand has ditched the well-known ‘clear blue liquid’ for a more realistic red colour in its latest ad campaign. 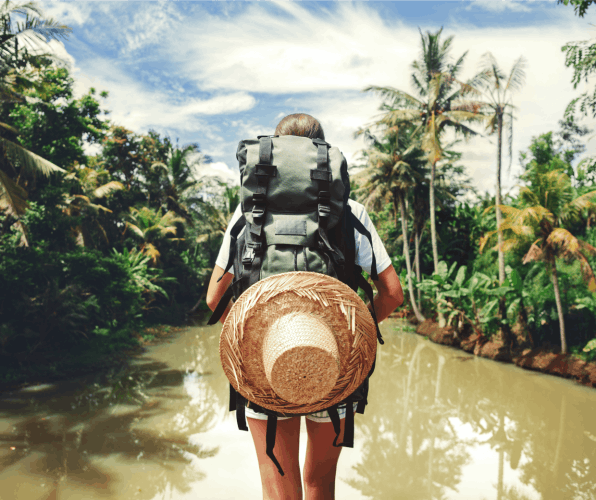 Essity’s global marketing boss has spent her career working across five different countries, which while difficult from a personal perspective has helped her better understand global business.