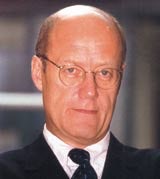 Bartle Bogle Hegarty chief executive Nigel Bogle has called for advertising breaks to be restructured to give ads the opportunity to engage with viewers and to stand out not only against other ads but also programming content.

Speaking yesterday (Tuesday) at Marketing Week’s TV 2004, Bogle called for broadcasters to consider shorter breaks, solus breaks showcasing just one ad and “premier” event breaks that contain advertising that is being broadcast for the first time. He also asked broadcasters to be more open to advertiser-funded programming.

“Give us a break,” he said. “Give us shorter breaks, a solus break and premier breaks that exclusively launch new campaigns.”

He admitted that regulatory restrictions could prove to be a difficulty, but appealed to delegates at the conference to get involved in a dialogue about how to achieve change.

Only the highest ad spenders could now hope to get their brand message heard on TV through repetition alone said Bogle, who warned that many senior advertisers are considering shifting some of their TV budget to other media.

He said this was due to increasing fragmentation of media, increased on-air clutter and over-powering programme content, such as Footballers’ Wives, which can end up making the ads in-between look lame.

Talking about the future, he said advertisers would need to make sure that their advertising is “engaging” and that the creative idea can be extended beyond spot advertising.