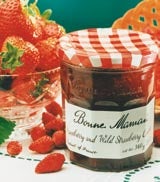 French food brand Bonne Maman is making its first foray into TV advertising with the sponsorship of a Channel 4 lifestyle documentary, French Leave.

The ten-part documentary, which starts on September 18, follows the unfolding dramas of two-Michelin star chef John Burton Race as he leaves his life running a London restaurant. The show follows him making the transition from city to rural life, and looks at local foods.

The deal, which was brokered by SponsorCom, part of MediaCom, aims to raise awareness of the Bonne Maman brand. The sponsorship will be supported by a consumer print campaign, which will also break this week.

Bonne Maman makes a range of products including luxury conserves, cookies and tarts. It is hoping to extend its product range in the UK as it has done on mainland Europe. The conserve range is still produced in France and the brand has stayed close to its heritage by retaining the traditional polygon-shaped jar. It also has a gingham-pattern lid to give the impression that it is home-made.