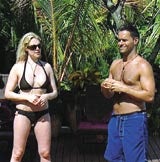 Bookmakers are threatening to boycott betting on some reality television shows because of their dwindling popularity, says William Hill.

Following lack of interest in shows including The Farm and Celebrity Love Island, bookies are hoping Big Brother 6 will rekindle interest in reality shows, or they may quit the market.

Earlier this month Ladbrokes suspended betting on Celebrity Love Island because of lack of interest, after taking a total of &£28 in bets on day two of the show.

William Hill says that unless Big Brother produces the goods it might consider whether it is worth taking bets on the shows.

“The betting has been flat for both Celebrity Love Island and The Farm and we hope Big Brother comes to the rescue,” says William Hill spokesman Rupert Adams.

“If it fails us we might have to review whether it is worth the time and resources to price up these markets.”

He says that teams of people spend a lot of time monitoring the action and preparing odds and adds that in future the company may assess a reality show’s popularity after its first week and then decide whether to continue offering odds.

Warren Lush of Ladbrokes says shows like Big Brother and I’m a Celebrity… remain popular. “Big Brother is still the daddy,” he says. “But a lot depends on the media coverage.”

John Ayling & Associates has been appointed by Allianz Cornhill Animal Health to handle the £1m account for its Petplan pet insurance brand following a four-way pitch against undisclosed agencies.

Having been brought up on Tom and Jerry cartoons, the Diary clearly remembers the horror of discovering that real cats do possess the skills to capture and kill mice (and, for that matter, that real mice tend not to have French nephews that visit them and paint caricatures of the cats in question). One cat […]

Sports and music fans are cynical about event sponsorship and think that sponsors should help to cut ticket prices, according to research by marketing consultancy Iris North. The study found that 60 per cent of people questioned want sponsors to subsidise tickets. It also discovered that most fans in the highly exploited youth market cannot […]