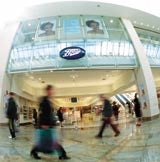 Boots is moving into maternity wear for the first time in a major departure that will see it take on Mothercare.

Under chief executive Richard Baker, Boots has already been building its presence in children’s and baby wear. It has been part of Baker’s strategy to increase the range of products available to mothers and families.

Baker has also introduced electrical products and ready meals into stores and has made opening hours more flexible. In addition, he has adopted a more aggressive pricing strategy.

SR Gent International is to supply a range of maternity wear exclusively to Boots, the brand name for which has yet to be decided. The range will appear in 15 stores at the end of April and will include casual fashion, day to evening wear, swimwear and underwear.

SR Gent already owns and supplies Boots with a super premium children’s clothing range called Molly ‘n’ Jack. The company is UK licensee for premium US childrenswear label OshKosh B’Gosh, which it also supplies to Boots (MW May 27, 2004). Boots moved back into childrenswear a few years ago with the launch of Mini Mode, which is supplied by Adams. Boots’ latest trading statement for the final quarter of 2004 showed a 2.6 per cent increase in like-for-like sales.