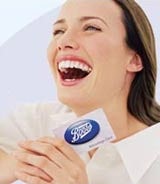 Online bank Egg and retailer Boots are to scrap their co-branded Advantage loyalty credit card, after the scheme attracted just 104,000 customers since its launch in October 2000.

Egg’s own credit card has signed up 1.6 million customers, according to the company’s half-yearly results, which were released on Tuesday 23 July.

An Egg spokeswoman says the bank originally saw the Boots partnership as a way to drive new customers to the bank, while keeping down customer acquisition costs. She claims the split was amicable and adds: “Given the individual successes of the Egg Card and the Boots Advantage Card, we simply agreed that we could do well on our own.”

The card will be discontinued in October, and Advantage credit card holders will be offered a separate Egg-branded credit card and a Boots Advantage loyalty card.

Egg now controls five per cent of the credit card market, and the company reported a half-year pre-tax profit of &£1.2m, against a loss of &£63.4m for the same period last year. The bank’s brand and marketing costs remained stable at &£20.8m, against &£21.1m last year, although its recent television campaign increased second-quarter expenditure to &£12.9m, compared with &£7.8m in the first quarter. Full-year marketing costs are expected to reach &£35m.