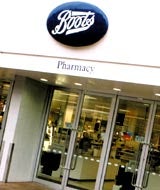 Boots is losing two of its senior managers – director of business development Martin Bryant and managing director of Boots Wellbeing Services Phil Douty – as part of a streamlining exercise.

The departures follow news that ZoÃÂ« Morgan, who oversees marketing for Boots the Chemist, Wellbeing services and Boots Opticians is also leaving the company in September (MW last week).

Douty’s responsibilities, which included overseeing dental care, footcare, as well as health and beauty-based services, will be handed to managing director of Boots Opticians Norman Usher.

A Boots spokesman says: “It’s about Boots not having a complicated management structure.”

The Boots Wellbeing Services division, which incorporates the opticians business, recorded a loss of £33.1m for the year ending March 31. Boots has indicated that it is working towards reducing that loss.

It is not known whether Douty who joined Boots as head of marketing development in 1994 and had a stint as head of customer communications, has a job to go.

Bryant, a former director of marketing business for Boots the Chemists and former managing director of Boots Opticians, is expected to leave the company in August. His roles will be split among other members of the Boots management team.

Boots is having a rough ride fending off competition from supermarkets, and it is experimenting with new formats such as Pure Beauty, as well as trialling services such as laser eye surgery, in an effort to increase sales. It is also running a trial of small outlets in Sainsbury’s store’s in an attempt to capture a slice of the out-of-town market.