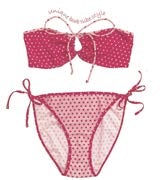 Boots has struck an exclusive deal with the National Magazine Company’s Cosmopolitan magazine to sell a branded range of bags and swimwear.

The move builds on its existing relationship with the publisher. Last Christmas Boots produced gardening gifts under the Country Living magazine brand.

This summer Boots will produce other gifts under the Country Living brand, such as tablecloths and picnic baskets.

Boots has also struck a deal to sell Naf Naf-branded swimwear on an exclusive basis and Jigsaw, Ted Baker and Ben Sherman sunglasses. It has extended its licensing relationship with French Connection (FCUK). Originally this was limited to toiletries, but will now encompass sunhats, T-Shirts, bags and lilos.

These products all fall into lifestyle – one of four key areas that Boots chief executive Richard Baker is focusing the Boots the Chemist retail business on.

The other three are professional healthcare and planning, everyday beauty and toiletries, professional and serious cosmetics and fragrances.

The retailer has also developed a new suncare formulation under the Soltan brand that offers more than 90 per cent protection against UVA rays. It claims that this is significantly better than any other product on the market, the best of which offer little more than 80 per cent protection. This has necessitated the creation of a new five-star rating for 90 to 100 per cent UVA protection. From spring, the retailer will also be selling a new toiletries brand for babies called Little Me Baby Organics, which it has devised with the help of a team of young mums.