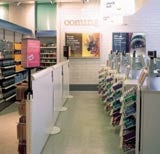 Boots is piloting an in-store television channel in four of its stores, using the system to showcase products from suppliers as well as those sold under its own name.

The retailer is using digital media network operator Avanti to run the trial, which began at the end of last year.

It is understood that advertising is being broadcast alongside content demonstrating the benefits of products stocked in the store.

Boots is the latest retailer to trial in-store TV, others being Tesco, Safeway, Sainsbury’s and WH Smith in its high street stores. It is expected that Tesco will soon unveil plans to introduce Tesco TV into 300 stores, giving third-party advertisers access to up to 10 million customers a week (MW last week). Tesco TV carries news and sport updates, information about Tesco and its products, promotions and third-party advertising.

Last year Avanti bought Translucis, which operates a TV network called Magnetic across 320 bars, from Diageo. It has also launched a TV music channel called MVN in 250 pubs that will carry advertising in between the latest music videos.