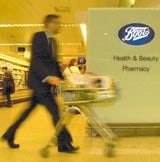 The Office of Fair Trading (OFT) is investigating the deal between Boots and Sainsbury’s, which has seen Boots taking over the health and beauty ranges in six of the supermarket’s stores (MW January 31).

The OFT is understood to have contacted other retailers, as well as health and beauty manufacturers for their views; it has also published information about the deal on its website.

Under the terms of the deal, which is on trial, Sainsbury’s has stopped selling health and beauty products in six of its stores. Instead, Boots-branded concessions operate within those stores, selling Boots own-label health and beauty products plus other manufacturers’ brands, with a pharmacy wherever possible. Concession staff will be Boots employees, but purchases will be paid for at Sainsbury’s tills.

The OFT’s preliminary investigations have been triggered because Sainsbury’s and Boots asked the OFT’s director-general either to rule that the deal does not breach competition regulations as laid out in the Competition Act 1998, or to give them an “individual exemption” from the act’s restrictions. If the OFT does decide to exempt the deal, then it will be required to hold public consultations on its ruling before it comes into force. One rival claimed that Boots and Sainsbury’s between them would control about 35 per cent of the health and beauty market.

A Sainsbury’s spokeswoman says another three concessions are opening soon. If successful, the partners hope to extend the concept to a significant number of the supermarket group’s 400 stores.