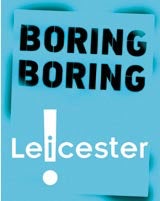 It seems that Barclays group chief executive Matt Barrett’s method of promoting a product by telling everyone how awful it is is catching on.

The agency charged with promoting Leicester and Leicestershire has devised a series of “challenging” posters, designed to instil local pride in residents of the city that Americans just can’t pronounce.

According to one of the posters, Leicester has “Nothing To Shout About”. The Diary would argue that the birthplace of Gary Lineker, Maggie Philbin, Engelbert Humperdinck and Lee from Big Brother 3 has plenty to shout about.

In addition to this, the campaign shows Leicester spelt with an exclamation mark instead of an “i”, apparently to prove that there’s more to Leicester than meets the, er… i.

However, as the Diary has fallen for this nefarious plan to gain column inches in the media, it feels obliged to suggest a tagline for the city’s next campaign. Based on its experiences in the East Midlands, the Diary would suggest that people who find themselves having to spend a day in the city may find it of more use to see “Leicester: Only 30 minutes drive from Nottingham” posters dotted around the place.