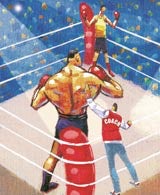 It’s all about the survival of the fittest, and those best equipped to succeed in times of recession are companies that continue to invest in staff training.

Staff training may be a way of getting workers up to speed with the job at hand, but it has also become a political hot potato in many organisations as they try to attract and retain top calibre staff.

In the marketing services sector, graduate recruitment schemes are vastly over-subscribed, but still there is a belief that added incentives are needed to attract the best candidates – and training is one of them.

But pressure on budgets as a result of the economic downturn over the past two years has meant that companies across the board have slashed training expenditure, in many cases making it a preserve of only the key executives. The question of who becomes eligible for expensive training schemes says much about how a company regards different parts of its workforce.

Overall spending on training in the private sector was estimated at about &£18bn last year (Key Note). But in marketing services, trainers say that some companies have tended to cut back on training for lower-level workers. However, they say there are hopeful signs that the worst of the downturn is coming to an end.

David Stone, managing director of Spearhead Training, which offers a range of training courses in marketing disciplines, says: “Over the past 18 months there has been a reluctance to spend money on training. The slowdown began at the end of the Nineties – prior to that, training was high on the agenda. The start of this year has been more promising: there is much more activity.”

Getting with the programme

He says that while larger companies have maintained their training budgets, especially for graduates, he has to struggle to encourage others to view training as an investment for the future. And even in the biggest companies, training for administrative and sales staff is being cut, although marketers still have access to the courses they have always had.

For specialist marketing courses, the Chartered Institute of Marketing is the UK’s largest provider, and it claims it has weathered the downturn as well, if not better, than many of its rivals.

Chief operating officer Chris Lenton says: “Overall figures are quite good. There has been a change in customer requirements and we are responding with blended solutions, shorter courses and programmes that are run over shorter periods of time.

“We’re finding it no tougher than anybody else, although clearly margins are under pressure given the state of the economy. We are still offering quality, tailored training products and are not relying on heavy discounts – unlike some competitors.”

A danger voiced by many in training is that if brand owners cut their budgets too severely, it could have a knock-on effect in the future, leading to a dearth of trained marketers in a few years time. Much as happened through the Nineties.

The recession of the early Nineties was severe, deep and sudden and came after rapid growth in recruitment of marketers in the Eighties when the profession acquired a new popularity among graduates. Faced with a choice between accountancy, the City and marketing, who in their right mind wouldn’t choose the latter?

Brand owners slashed not only their ad budgets but also their training expenditure as the excesses of the Eighties turned to puritanism in the Nineties. As job opportunities dried up, people either stayed in their existing posts or lost out altogether. And there was a lack of career development among the lower echelons of marketers. This fed through to companies later in the decade when shortages of highly skilled senior marketers became apparent. But there is one big difference between now and then: the advent of the internet.

The move to “blended”solutions is part of a common trend these days, with training facilities going online as the amount of time spent face to face with a trainer is reduced. This cuts costs, but is portrayed by training companies as a way of allowing trainees to work more effectively at their own pace – rather than cut back on courses across the board, companies are getting more value from the same number of courses.

Karina Ward, international marketing communications manager for internet learning agency Netg, says: “In today’s economic climate, companies are feeling the squeeze on training budgets and line managers are being asked to show more value. While e-learning has played an important role, it’s not a panacea.” Online learning can never totally replace classroom-based training. At some point, trainees will have to get together with other learners to discuss case studies and practise their skills.

In the packaged goods sector, companies, such as Unilever, Procter &amp; Gamble and Kraft, continue to hire graduate recruits and train them for marketing positions much as they have always done. But in other sectors that have grown dramatically – and faced crisis – over the past decade, such as media, IT and telecommunications, there are serious worries about a training shortage. This reflects how these areas have been worst hit by the downturn.

According to Steve Mills of training company MTP, which runs courses in marketing for Unilever executives, the packaged goods giant is not cutting back in this area at all. “Unilever runs foundation programmes for marketers worldwide and the number of programmes we are running for it is the same as, if not more than, last year. So, the fact that there may be a recession coming is not reducing the spend being put behind the programme.”

Unilever runs three one-week courses during a graduate recruit’s first 18 months. There are then top-up courses in following years. These continue throughout a marketer’s career, even as marketing directors, although at more senior levels the emphasis changes from training to development.

Mills says that while many other companies are cutting their training spend, this is not an issue for Unilever. “We do not focus on cost, but on what we are trying to do as a business and what we require in terms of our marketing plans,” he says. These needs break down into asking what drives brands, getting greater consumer understanding and improved customer management.

But he concedes that training, like advertising – a fellow target for budget cuts – is difficult to measure and thus hard to justify the expenditure in hard times. “We try to qualify it by asking ‘what did I know before and what do I know now?’. We measure the improvement and ask what we do with that learning. Then we ask what results it gave.”

He estimates that Unilever spends about &£3,000 a year on training each of its recruits over a period of a few years, though this figure would fall after a period. But this can mean that tens of thousands of pounds are spent on executives during the course of their professional careers.

Some companies have tried to improve their offer to graduate recruits. Within WPP Group there have been moves to set up a graduate school with recruits working at different agencies within the group as a way of attracting top candidates who might be tempted to go into management consultancy.

Leo Burnett – which attracts some 1,000 applications a year for just three graduate recruitment places and spends nearly &£30,000 a year on processing those applications – has set up a dedicated website for graduate applicants. The site is intended to reduce the huge cost of processing applications. Steve Barton, head of the agency’s below-the-line division Leonardo, is responsible for aspects of recruitment and says: “We set up the site to reduce that &£30,000 spend, and it worked. Graduates expect agencies to provide information in a pleasant way. If you don’t do it well on the Net, it says a lot about your company.”

Agencies and brand owners can expect the high number of applications they receive from graduates to continue as many cut the number of trainees they hire. A recent Marketing Week/Ball &amp; Hoolahan survey revealed an increasing tendency to short-termism among marketing companies, with fear about the economic impact of war and a downturn in house prices making them reluctant to take on new staff.

The great issue with training is that once staff have learned all they can, they may be tempted to use their new-found skills elsewhere. But companies offering good training schemes may find they make themselves more attractive to top candidates precisely because they are willing to invest in training. And they may find they are in a better position to succeed if the economy starts to pick up.

The Diary, renowned far and wide, receives a high volume of mail from all over the world – and particularly West Africa. Reader, you would be amazed at how many youngest sons and second wives of deposed African leaders are now resident in Abidjan, de facto capital of war-torn CÃ´te D’Ivoire. Many of these poor […]