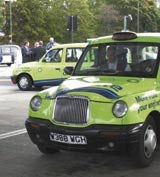 BP is launching a premium fuel brand to rival Shell’s Optimax petrol, and is promoting it with a multi-million pound television campaign created by Ogilvy &amp; Mather.

Called BP Ultimate, the brand was created by brand consultants Landor. The fuel is designed to burn better, thereby reducing emissions, increasing performance and reducing noise levels. It is available as both petrol and diesel. The brand will compete with Shell’s Optimax brand, launched two years ago.

The launch campaign for BP Ultimate starts with outdoor and London taxi advertising, followed by TV, radio and press next week. Media buying is by MindShare.

The TV ads feature people using their cars in unusual ways, such as a woman driving a people carrier while carrying a child on her back. The image then zooms back to show the planet earth and the fuel’s environmental credentials are revealed, which then fade to the new logo.

The new brand will be available at 100 petrol stations by the end of the week, and at all BP service stations by January 2004. BP Ultimate fuels will be sold alongside BP’s standard offering and forecourts will be partially rebranded in those areas where BP Ultimate is sold. BP plans to roll out the brand globally.

Landor was responsible for BP’s rebrand as “Beyond Petroleum” in 2000, as well as the new corporate image of an exploding sunflower to highlight its intentions of becoming more ecologically responsible.