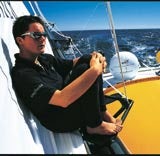 DIY chain B&Q is featuring yachtswoman Ellen MacArthur in an ad campaign to promote its Performance Pro power tools brand after the she sailed around the world single-handedly in a record-breaking 71 days and 14 hours.

It is the first time B&Q has used MacArthur in an advertising campaign, despite paying &£2.5m a year to sponsor her.

MacArthur has been sponsored by B&Q parent Kingfisher for the past six years, but three years ago the company decided to use its subsidiaries B&Q in the UK and Castorama in France as the sponsoring brands.

The B&Q sponsorship covers the construction of her yacht and has funded the 27,345-mile trip.

The ad campaign broke just hours after the yachtswoman set foot ashore yesterday (Tuesday). The ads congratulate her on her feat and show how the B&Q power tools were used in building her boat. A press campaign launches this week.

MacArthur is a more famous figure in France, where sailing is a more popular sport than in the UK, though this may change now that she has broken the world record.

B&Q marketing director David Croft, who is also head of sponsorship for Kingfisher, says: “This will go down as the best sponsorship arrangement for a long time. It has surpassed our expectations and is very good value for us and Kingfisher.”