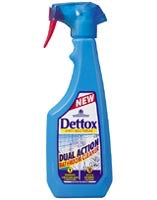 Do I put it on the floor or on my three-year-old son’s grazed knee? Consumers familiar with the Dettox brand as their everyday surface cleaner could be forgiven for scratching their heads in confusion.

And their confusion may not be made any clearer by Dettox owner Reckitt Benckiser’s (RB) decision to take the brand off the shelves and replace it with Dettol, the antiseptic liquid used the world over as a quasi-medicinal product.

RB, the Anglo-Dutch company formed in 1999 after the merger of Britain’s Reckitt &amp; Colman and the Dutch Benckiser, recently decided to restrict itself to five core categories: surface care, home care, dishwashing and health and fabric care, and to turn its household brands into global brands. The merger of Dettox into Dettol forms part of this strategy.

According to the latest Taylor Nelson Sofres data on the UK antiseptic market, Dettol is in third place in terms of market share by value. The market leader is Sudocrem, manufactured by Forest Laboratories Europe, followed by Novartis’s Savlon brand. Dettol tops the list in the antiseptic and liquid disinfectant market, followed by Pfizer’s TCP brand.

The axing of the Dettox brand, a rival to Unilever’s Cif and Domestos, follows recent moves by Unilever and Procter &amp; Gamble to rationalise their portfolios in order to concentrate on building “power brands”.

Julian Hardwick, a household goods analyst at ABN Amro, says: “It is simpler to operate with fewer brands. RB has always adopted a ‘disinfectant approach’ to cleaning products and the merger of Dettox and Dettol brands is not a big step away from its core focus.” According to Hardwick, RB’s global disinfectant business is worth more than £200m in terms of sales.

Mark Lynch at Goldman Sachs predicts there will be further brand culls within the RB product portfolio. “Over the past two years, it [RB] has dramatically increased its marketing investment. Clearly that has paid off in terms of sales growth and profits,” he says.

The company recently reported a 19 per cent jump in its third quarter net profits to £74m. The net revenues rose seven per cent to £843m for the same period.

But Lynch says it will be difficult for the company to market the merged Dettox/Dettol brand since the two have very different consumer images. “Dettox is more of a cleaning product whereas Dettol is the old-fashioned pharmacy-type brand. But the Dettol brand is used quite extensively globally and I think RB would like to move down the route of more global brands.”

A household goods buyer, who says Dettol is a much bigger brand than Dettox in terms of UK sales, does not think the move will “flutter many feathers” within the cleaning market sector.

But branding experts claim the market will have to sit up and take notice if the company repositions the Dettol brand.

Paul Walton, chairman of branding agency The Value Engineers, says: “The future of the Dettol brand – that is the question to ask. The old consumer perception was: Dettox for things and Dettol for people. Clearly, in this age of brand focus, RB has decided that perception is not big enough to promote the idea of a power brand.”

Axing the Dettox brand will not mean extra shelf space for rival cleaning brands, he adds. “I cannot believe that RB has given away the Dettox business to the Unilevers and the SC Johnsons. The company obviously has a vision for the ‘new’ Dettol brand and it will be interesting to see what it is.”

Beverley Law, director of brand identity at branding consultancy Tutssels Enterprise IG, does not think that an “all-purpose” brand proposition – one brand to perform all functions – will be very successful.

“Dettol is a heritage brand but I think it has been stretched beyond its capabilities and been weakened in the process,” says Law. “I wonder how much more it can be stretched.”

But, according to a Mintel report (May 2000), SC Johnson, a bigger player in the market than RB, has benefited from its strategy of sticking to a single brand for all cleaning purposes. SC Johnson, which manufactures Toilet Duck, Pledge and Mr Muscle, is the second largest player in the UK household cleaning market, behind Unilever. The report adds that RB follows SC Johnson, with a market share of eight per cent.

Since the Interpublic Group (IPG), which owns McCann-Erickson, bought FCB earlier this year, there has been tension between SC Johnson and RB over ad agencies. RB has now ended its relationship with McCann-Erickson, which handled the majority of its worldwide business, while FCB continues to handle SC Johnson’s work.

Last week, RB announced an alliance between its Lysol cleaning product and Hoover Company US, to produce Floor Mate – a product that washes and dries hard floors. It is not known whether the product will be introduced to the UK.

Most analysts are supportive of RB’s strategy and believe concentrating on cleaning products makes sense in times of economic downturn. One analyst says: “People do not stop cleaning in a recession and RB seems to be getting that right.”

But ultimately it is consumers’ reactions to a new or rebranded product roll-out that matter. Loyal Dettox users may take well to transferring to Dettol – then again they may replace it with a rival brand.