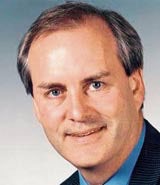 When you review a book it is always fun to see what other reviewers have made of it. So I turned to Stephen Bayley’s review of Hamish Pringle’s new book Celebrity Sells with eager anticipation. As everyone knows, Bayley is an immensely famous celebrity himself. And, as he likes to remind us, he was once dubbed “the second most intelligent man in Britain”. So his review, in this month’s Management Today, was bound to be brainy.

Reading other people’s reviews is a bit like reading reports of a football match you went to. Sometimes it seems as though the reporter was at a different game entirely. Sometimes it seems as if he cheerfully dreamed up his copy at home, without venturing out into the cold at all. Naturally no reputable sports writer would do such a thing. It’s just that their reports read that way.

And naturally Bayley, being so brainy, studies the books he reviews assiduously. But for some reason his reviews do not read that way. Maybe this is because he loves being waspish, not to say malicious. And it is far easier to criticise a book if you don’t bother to waste too much time on its content. Not that writing reviews which pretty well ignore the book being reviewed is a doddle. No way. It’s one of those things that only exceptionally brainy people can do.

And Bayley’s carve up of Celebrity Sells is a masterful specimen of the genre: only about one-fifth is devoted to the book. Puzzlingly, much of the rest is about the dippy Lord Brockett. Less puzzlingly, quite a lot of it is about brainy Bayley himself. Neither of them is mentioned in Celebrity Sells, which again seems puzzling. How can a book about celebrities ignore the second most intelligent man in Britain, not to mention one of our dippiest peers?

I feel it only fair acquaint you with Bayley’s opinion of Celebrity Sells, because I myself happen to think it admirable. It is the first thoroughgoing exploration of the pros and cons of using celebrities in marketing communications. But, not being Britain’s second most intelligent man, what do I know?

The book is not flawless. In my view it spends rather too long discussing the ways in which celebrities influence everyday life. A lot has already been written on this subject. Almost half a century ago, the great American sociologist Daniel Boorstin pointed out that, even then, most celebrities were just famous for being famous. Trawling through the role of celebrities in modern society, Pringle allows his exuberant intellectual curiosity a tad too much indulgence. It is delightfully readable stuff, but will only be of tangential help to anyone thinking of using celebrities in their marketing.

Summarising more than three-dozen IPA Effectiveness case histories, Pringle illustrates both how varied celebrity campaigns can be, and how they can be evaluated. Nobody has done this before. He tends to accept statistics a mite uncritically, but in the main he supports his arguments with robust data, much of which was new to me, and most of which was helpful.

Brands and celebrities work so well together because they are two sides of the same coin. First and foremost they rely on awareness. In both cases it’s a numbers game. Brand or celebrity, the more people who have heard of you, the bigger you are. Today the names of “A” list celebrities and of superbrands are known to almost every man, woman and child in the land.

The second similarity is the ability of brands and celebrities to turn their fame into cash. Major brands can sell at premium prices, and celebrities can transmute their monikers into pure gold. As Boorstin wrote: “A sign of a celebrity is often that his name is worth more than his services.” Not a lot of celebrities don’t know that.

It is because branding and celebrity are so similar that they are increasingly entwined. Pringle shows that the number of campaigns using celebrities has nearly doubled in recent years, which is why Celebrity Sells is so timely.

Ignore Bayley’s bitchy bad-mouthing, should you happen to read it. Like most assassinations, it was done with malice aforethought. Buy Celebrity Sells.