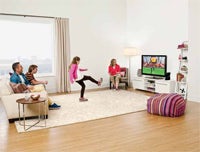 Gamers who managed to get their hands on the new Kinect console are sure to have had a very merry Christmas, playing by simply jumping or waving their arms around (see main image).

But perhaps not as merry a time as Kinect parent company Microsoft, which sold 2.5 million units in the first 25 days of sales in November. Its reported £300m ad spend, including commercials dominating the breaks during The X-Factor final last year, looks like it has paid off.

While these figures might show that gaming has more hold on us than ever, the statistics for those playing more casual and less involving games on social networks are even more impressive, in terms of sheer volume. About two out of every five Facebook users play games on the networking site every month, equating to 200 million people globally.

The study asked 7,500 people across six countries who are amenable to gaming – including 1,250 in the UK – about their playing habits and discovered that 50% use Facebook to play games.

Rumbi Pfende, head of RealGames UK, which commissioned TNS’s research, says Facebook will continue this crucial role in gaming, and will increase in importance as a platform for games developers.

“Facebook has become a central destination in the UK [for gaming] as it is the dominant social platform. As the gaming market becomes more crowded it is easier for players to move around, so using Facebook [as a developer] makes sense commercially,” she says.

Gaming is the fourth most popular regular activity on Facebook for UK users, according to the research, after looking at photos, updating a profile and chatting with friends. More than 40% of people who play games on social media sites say they prefer a central hub, such as Facebook, for playing games.

For brands wishing to advertise around games on the site, developers will be working hard to keep people on the page. “If you want to make more money [as a developer], you have to keep people in your space and give them no reason to go elsewhere. That is probably what is driving the development of Facebook,” Pfende claims.

The game FarmVille – where users look after virtual farms – has more than 55 million users and is the most popular game on Facebook. Pfende makes the comparison between the online and real worlds, as the average FarmVille user is revealed to be a 55-year-old female.

“They are willing to spend time tending crops, whereas younger gamers can’t be bothered. That is what used to happen in real neighbourhoods,” says Pfende.

Despite their interest in playing, people are not interested in making new friends via playing games. Only 13% cite this as the reason for playing – it appears to be more about challenging existing friends to play.

Facebook has begun to monetise gaming, offering Facebook Credits that users can “spend” to obtain extra features on games. In November, it also started selling gift cards in retailers Tesco and Game.

Facebook claims that in future all games will be social, or played with friends. Head of international business development for EMEA Christian Hernandez says: “One of Facebook’s goals is to create a great place for games – both for the people who love to play and the developers who want to create them.”

According to Pfende, if users pay for games on social networks they will spend more time playing them. If someone has spent money on something, they may value it more, she says. “Parting with money can create a barrier to exiting a game – people won’t leave if they’ve paid for it, so that is good for advertisers.”

The survey reveals that more men (32%) than women (14%) have spent money while gaming on a social network.

Although only 7% of those questioned say they play on Facebook because there is less advertising than on other areas of the site, brands that want to be connected with the games on social networks must be wary of being intrusive, warns Pfende.

“Once you get into a game, users will not stand for having brands all over the place. With console games you can have billboards on a racing track, for example, but if a brand wants to be involved in-game [on a social network] they would have to be extremely subtle,” she states.

Brands such as the NSPCC use games in a variety of ways. On the Xbox 360 game Skate, it has advertised its Childline service on billboards in the game’s scenery and has used its brand in a more integrated, less overt way, on community site Habbo (see The Frontline, below).

More than a third of those questioned state ease of use as the reason they play games, while simply liking the games is cited as a reason to play by 65% of survey respondents. This trend of simplicity also appears to be a factor in encouraging the take-up of mobile gaming.

The research shows that mobile is the second most popular platform for any type of gaming, with 45% of women and 52% of men saying they use their phones to play. This compares with the 60% of women and 65% of men who use games consoles.

Pfende says the future of gaming lies in the growth of the mobile space. “Smartphones have turned gaming around because games look amazing, and you have a big screen and can play against others. Now the [handset] market is catching up, the [gaming] market will explode.”

The Frontline: We ask marketers on the frontline whether our ’trends’ research matches their experience on the ground

We launched our first game, with Koko Games, called Rough Roads on our website and on Facebook in November. It is part of a campaign to promote the second edition of our book Make the Most of your Time on Earth and also has a competition to win free travel for a year.

One aim was to get people to enter the competition by subscribing to our newsletter and driving awareness.

You don’t have to sign in or provide details to play the game. It’s a delicate balance between making it accessible to as many people as possible versus how much you ask people to do before they can play.

The statistics in the research were really interesting, especially about why people play on Facebook. They are quite low in terms of meeting new people, but quite high for challenging friends. People are gaming not to extend their network but to compete against or interact with their established friends.

I don’t think we would do a paid-for game, but we might consider converting it to an app, or consider having a co-sponsor.

We look at trends like this and see how they might affect what people might do, but we are quite careful about interaction with social media.

We don’t have an [official] Facebook presence because we believe that people on social networks are having their personal time. We are quite careful about positioning the brand in a prestige way but not in an interruptive way, so we don’t think that Facebook is the right place for us.

So gaming, or charging for gaming in a social network as a way of making money isn’t something we’d do at the moment because it doesn’t feel like the right prestige positioning for Audi. However, I’m not saying we wouldn’t ever investigate social gaming.

We are in games such as [social networking service] PlayStation Home, which allows people who don’t normally have the opportunity to experience our cars to take a virtual test drive. From that, we want people to try our products and feel what it is like to drive an Audi physically.

It is difficult to attribute sales to an experience someone had online or through a game. But there is an argument to say that the feeling they get will encourage them to at least consider us as a car that they might want to buy.

We created a virtual ad agency in [online community site] Habbo. About 50,000 children and young people became staff of the agency and created all of our work for the whole year [for helpline Childline].

In Habbo, a young person might find something in common with someone they wouldn’t normally. If we can facilitate that chat we are telling the audience that we understand them. Those that spend the most time gaming are a specific type of young person and their life issues tend to be a bit different to those that don’t game.

Somewhere along the line you discover a more serious issue, so it is trying to give people as many entrances into that conversation as possible.

We also advertise within games. So in [professional skateboarder] Tony Hawk’s Skate on the Xbox, all of the advertising on billboards and phoneboxes was for Childline.

What is really interesting in the research is the really short amount of time people spend playing games on social networks. It seems that the less money someone spends on gaming the less time is spent gaming.

In the next 12 months we will be doing some significant work on Facebook around gaming.

What stood out in the stats was that lots of men and women of all ages play games of many sorts. It also shows there are different audiences for different types of games.

From an advertiser’s perspective, this is a pretty good evaluation of gaming to send brand messages.

What we do now spans many different genres and platforms. We have gaming within Windows Live Messenger, and at the other end of the spectrum we have Xbox and Kinect with games like Halo or Call of Duty.

We might have a brand such as Samsung aligning with Halo to talk about a new television that is very hi-tech and has high fidelity – the type of features that would be interesting to that audience.

Microsoft has been making games such as Solitaire for almost its entire history. We have micro-transactions on the Xbox but I can’t comment on what we are going to do beyond what we have already released.

Method
TNS Global spoke to gamers above the age of ten. It used an online panel of 7,500 people in the UK, Belgium, USA, France, Germany and Netherlands. 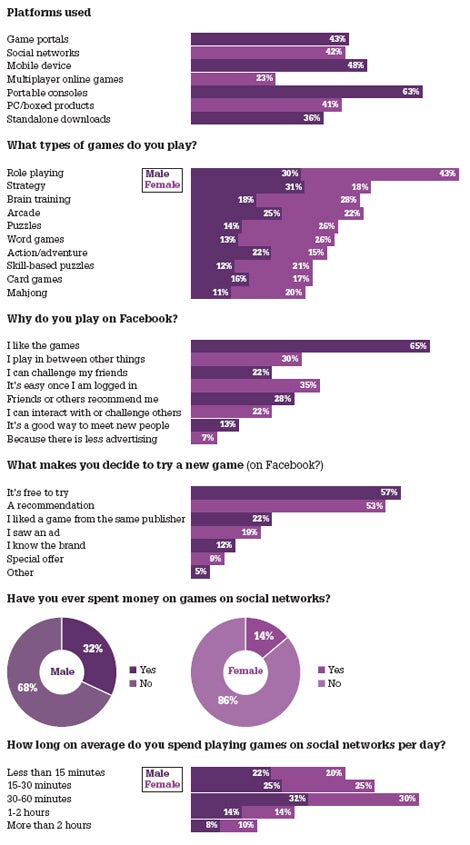 Look out for our Digital Strategy marketplacefeature on social gaming, which comes out withinMarketing Week on 20 January