Sainsbury’s has joined in with the high jinks with its own, quirky solution to the age-old conundrum of toast falling butter-side down. The retailer is promoting what it claims is the “world’s first butter-side-up bread” that has been baked in “higher temperatures allowing for a more rapid expansion of the dough”. This process helps create larger air pockets in the loaf, which in turn absorbs butter and jam more evenly, adds Sainsbury’s. There is one caveat, however, that it is likely to turn off some consumers; 1 out of 100 pieces of bread tested fell butter-side.

Tesco has coined the world’s first tablet for two. The Cudl, a spinoff of the supermarket’s Hudl tablet, uses “springback technology” to tether two devices together so that couples can spend time with one another while using separate devices. Tesco claims the product is the best thing for relationships “since the Finest Dinner for-Two deal” offer.

Not to be outdone, BMW is looking to inject some German ingenuity into its effort. The car marque is introducing its patented artificial G-force technology with the promise “Driving slow never felt so fast”. When activated at speeds under 20mph, the aptly named “Forced Injection Booster” (FIB) converts kinetic energy from the car’s engine into positive g-forces. These are then directed to the driver and passengers through the car’s air conditioning vents, while a mild electric current is channeled through the front seats, to simulate the effects of driving fast. Interested drivers are asked to email mika.notbetru@bmw.com for further details.

BMW is also bringing its Mini brand in on the fun, in partnership with Iris Worldwide, with the new Cooper T – the world’s first tea-powered vehicle. Drivers hoping to get a first taste of the innovative model can visit Mini HQ in Gloucester on 1 April where it will be shown, the car marque says.

Warburtons took the opportunity to reveal on Facebook plans for its brand new office in London. The baker has concocted a design, created by WCRS, that sees two slice shaped buildings sandwich the Gherkin tower.

Energy drink brand Boost is hoping its own effort to fool consumers is more convincing. It is promoting energy shampoo ShamBoost, launched after over a decade of “in-depth research”. The drinks maker says the product contains only oil nutrients from the “crystalline xanthine alkaloid derived from the seeds of guarana berries, which are also known to reduce fatigue and minimise energy lows”. An online advert (see below) is running to push the credentials to hesitant consumers.

Virgin Active is showing off its sense of humour with a tactical push for its fictional “smart pants” based on David Beckham’s posterior. The cheeky garment is described as having a built-in pedometer so that wearers can more easily keep track of buttock clenches in order to help them tone up their behinds. A cheeky video (see below) is supporting the stunt, playfully riffing on H&M’s David Beckham spot from last year. 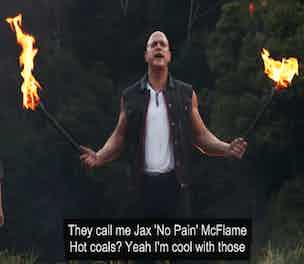 Lighter manufacturer Zippo is looking to capture the “irreverence and flair” of the Old Spice Guy marketing stunts with its own brand mascot, a move it hopes will keep it relevant with younger consumers worldwide.

It is a year since HMV was bought out of administration by Hilco, saving 141 of the high street retailer’s stores and its online presence.