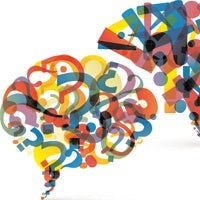 Brands are failing to exploit the potential of social media channels when it comes to customer service, according to a study by Maritz Research, exclusive to Marketing Week. A massive 85% of people in the survey say they have never been contacted by a brand after posting positive or negative comments about it online and, significantly, 51% of those who make complaints expect to be contacted.

Added to this, 47% say they would be happy to be contacted and for 32% of people, this would be something they love.

This is an opportunity for brands to get in touch with customers, says Roger Sant, vice-president of Maritz Research Europe. “This should feed into a social media strategy. Just writing a nice note saying ‘I’m from X company and I’m sorry you feel this way,’ obviously can’t be such a bad thing. There was a small percentage who say they wouldn’t like to be contacted, but not many, so the balance is in favour of contacting people.”

Of the 15% of people who had been contacted by a company after writing something online, 32% say they loved it and 47% say it was ‘ok’.

This can apply to people who are saying positive things about brands, adds Sant. “Many businesses say they do a lot of work in getting back to people who have complained, but never respond to someone who says they had a great experience. You can get a lot of kudos by responding and saying you are pleased they had a good experience.”

People are not afraid to say what they think in the digital space – 81% have praised or complained in some way and 77% expect to complain in future as well. And of the 1,000 people in the study, just under half of them use social media frequently, with just over 24% saying they do so to give credit and 23.5% to vent feelings to family and friends. Fourteen per cent use social media as a last resort, and 8% to get an immediate response.

One statistic that surprised our Frontline panel of marketers (see below), is that 26% of people have complained about a company via Facebook and only 5% via Twitter.

Maya Robert, a social media manager at utility comparison site uSwitch, says: “We do have a Facebook page, but contrary to what this research found, the majority of our queries come to our Twitter page.” 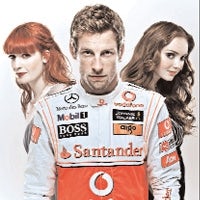 For Jakub Hrabovsky, head of web relations and social media at Vodafone, Twitter is a more efficient way to manage customer services. “It is a more real-time channel than Facebook, where people tend to dip in and dip out making it a little harder to communicate through,” he explains.

But the trend for using Facebook as a communication line looks set to continue, with 74% saying they use it to give praise. The reason that more people in the research are posting through Facebook is simply because there are more people who use it than Twitter, according to Sant. Most people say they are posting comments to share or vent their views with friends and family, which Facebook might lend itself more to than the micro-blogging site.

People are much more sceptical of being contacted by a company out of the blue when they haven’t posted any comment online about that business. Only 7% say they would like it and nearly a third say they wouldn’t like it.

Sant explains: “It would be seen as much more intrusive if a company contacted someone without having good reason. If a person has posted something online, out in the public domain, there does seem to be an expectation that the company has a right to contact you; and when they do, it will have a generally positive impact.”

In terms of sectors, the experiences people say they have had seem to correlate with the amount of time they might engage with a particular industry. For example, a third of respondents say they have had an ‘outstanding’ experience with retail, because people are used shopping regularly online.

Only 10% say the same for automotive. While car owners are likely to say they love their vehicles, according to other research by Maritz, they are unlikely to be in touch with the company unless something goes wrong.

“The automotive industry has the highest degree of emotional connection. People might say they ‘love’ their Audi or Jaguar, but they wouldn’t consider that a particular ‘experience’. The only specific experience you have is when it breaks down, when you go for a service or when you buy a new car.”

Travel and leisure also do well in terms of people having positive experiences – perhaps because they are on holiday and therefore associate happy feelings with it. Just over 40% have had an outstanding experience and 24% say they’ve had a bad experience. But just 7% of respondents have posted something on reviews site TripAdvisor about their holiday.

While there seems to be some disparity between whether customers and brands are posting comments and being responded to via Twitter or Facebook, the message for marketers is clear: interact when appropriate with people, both regarding complaints and positive feedback, and they may just be your fans for life. 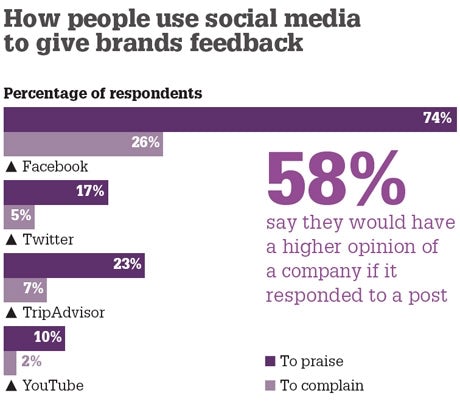 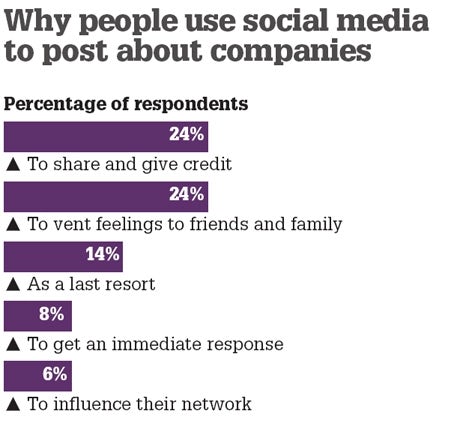 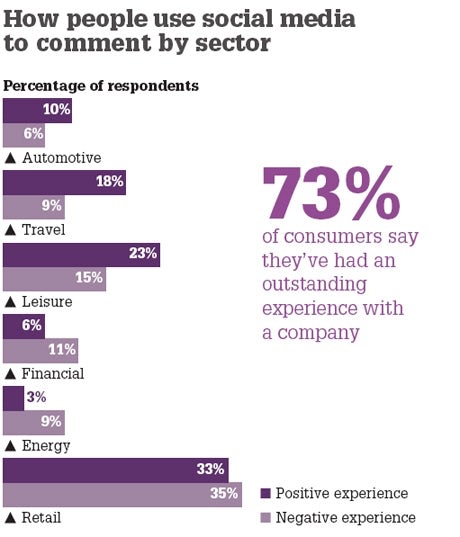 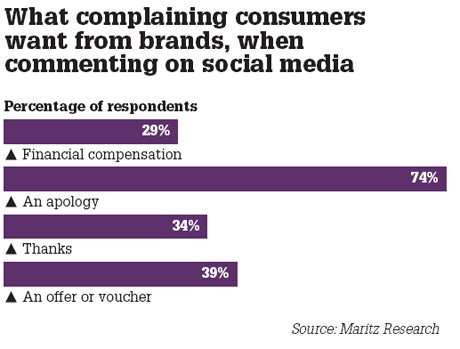 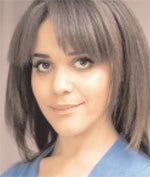 It was interesting to see in this research that people are more than twice as likely to want an apology than financial compensation. When I set up @uSwitchHelp [the Twitter account for customer services], my thoughts were that people don’t want to get to the point when they are demanding financial compensation, they would much rather have that problem dealt with effectively and feel like they have personal attention.

These figures demonstrate that the more effectively you respond, the more quickly you will demonstrate you care and customers will go away happy.

We do have a Facebook page, but contrary to what this research found, the majority of our queries come through our Twitter page.

We try to be pre-emptive with customer services/ if we know that there is a particular issue or something has been in the news about an energy price rise that we know our customers will be concerned about, we can Tweet out really relevant things. If a customer comes straight to us that is when someone in our customer service team tries to deal with that query.

The large percentage (85%) of people who had never been contacted after posting a complaint is a real example of where companies are missing a trick. Consumers are often pleasantly surprised by our response, so we are more likely to turn a customer who associated us with a negative feeling into having them feel like they have been valued. It is a good way of turning a negative situation into a positive one.

Social media is a public space so there is also the brand development that goes around that. We are trying to protect our brand and be as helpful to customers as possible. 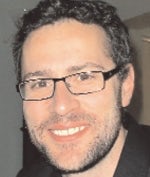 Twitter plays a large role in customer service because we are a customer-facing organisation. It is always going to be a very important platform to offer fast solutions wherever we can. For more complex issues, we have an e-forum, because Twitter and Facebook are limited in terms of the type of messaging we can give out, for example with sensitive information.

The statistic that stood out for me in this research is the 85% saying they have never been contacted by a brand [after posting a comment]. That shows what an amazing opportunity there is for brands to communicate directly with customers.

More than 90% of the incoming traffic on our social media channels is customer-related comments or issues. We find that the vast majority just want a solution and don’t care whether you apologise or offer them compensation – and Twitter or Facebook are the fastest ways to get a response. 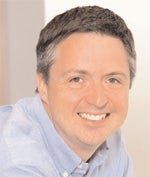 I think it is shocking that a lot of brands are not contacting people, according to this research. As a marketer, you think that is a call-out into the wilderness for people to actually wake up and respond.

We run [customer services Twitter account] @DellCares in 11 languages worldwide. We sell direct so have very direct customer relationships. If you are doing telephone and direct sales and online, then social [media] is a natural extension to that.

There are a number of ways we have extended our customer experience to social – we have a social media command centre which monitors about 25,000 conversations on the web a day. There will be a percentage of those who are saying ‘I need help’ and that post then gets flagged to assess whether it is appropriate for us to take action.

We originally thought that @DellCares was a way for us to marshal and redirect support-related messages. But over time it has become a channel in itself where people are electing to have a customer experience rather than the routes they would have used in the past, such as the phone.

It is going to take a while for one particular channel to dominate as we have millions of customers all over the world. A lot of those relationships are customer to sales team to support team – we are not just a business-to-consumer company, the majority of our dealings are business-to-business. In B2B, people are increasingly interested in using social as a means to interact.

You can’t build an ivory tower website and expect people to come to your assets. You need to be on Facebook and Twitter and support that by tuning into places where people are having conversations about you. Then you have to make judgements about when you can and can’t interject.

I think we will always be surprised by how much people want you to be visible and step in and give help, which the research was quite strong on. Seeing that 32% of people loved it when they did get a response emulates our experience, and has a knock-on effect in terms of brand and reputation.

Michael Nutley’s article on why marketers must look to new places to turn data into treasure (MWlinks.co.uk/DataTreasure) fails to address how we harness this explosion of data and use it as a marketing tool. It is true that we know more than ever before about our consumers and that as the number of platforms through […] 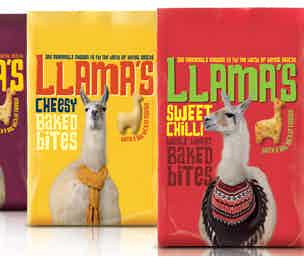 Tesco has launched a snack food brand called ‘Llama’s’ – the latest example of its ‘venture brand’ strategy to develop exclusive brands and products that do not carry the Tesco name. 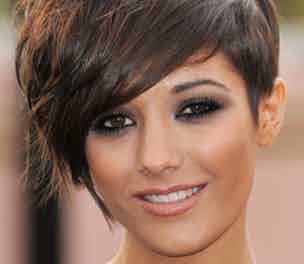 Charity Mind has partnered with Glamour magazine to launch a PR drive starring Frankie from The Saturdays to raise awareness of mental health issues.