Pop-up shops are springing up all over the UK as brands bid to liven up the high street and fill empty stores in the run-up to Christmas.

But while shoppers are becoming used to seeing physical brands expanding into temporary outlets, etailers are now using the trend to take their wares offline, often for the first time.

Ebay is leading this with the opening of a pop-up store in New York. Nick Gray, managing director at creative retail marketing agency Live & Breathe, says this not only “gives eBay a physical presence” for the first time, but is a “great opportunity to draw attention to a brand that does not normally appear on the high street”.

Ebay is following in the footsteps of brands such as Marmite and HMV, which have taken advantage of empty retail spaces in high streets to open festive pop-up outlets.

Food brand Marmite, like the etailers, has never run its own retail operations on the high street before. It is normally stocked within other retailers, so its two-storey shop on London’s Regent Street selling its food and gifting range is a move into new territory for the brand.

Marmite marketing manager Noam Buchalter says the store, which will be open until the new year, is allowing the brand to provide a full “experience” for its customers, while showcasing the full-range of products on sale. He says we won’t be seeing a chain of Marmite stores in the near future, but this foray into retail allows the brand to test customer reaction to its high street presence.

Test the waters
Other brands are capitalising on the effects of the recession on the retail market to test the waters for future expansion. HMV is taking empty space in ten locations across the UK. Those stores deemed successful may remain open, according to HMV property director Mark Bowles.

He believes the pop-up shops “could well become a feature of our trading in future” especially in the run-up to Christmas where about 40% of the annual consumer demand is generated. Book publisher Phaidon is also taking advantage of vacant property by opening two stores in London for the festive period.

Retail design agency Sheridan & Co has taken on a store in London to help its clients test different retail designs. Luxury luggage brand Moncrief will be the first to launch a transactional pop-up shop in the agency’s Insight Store. Chief executive Michael Sheridan says: “Insight gives us a space to flex our creative muscles, but also to measure the effectiveness of these more experimental ideas in a controlled space.”

If a pop-up concept works, it can even become something more established. Magazine brand Monocle has opened a store permanently on the high street after initially testing reception to the concept in a small store in Marylebone in 2008. It has now extended its retail footprint by opening more stores in various locations, including Los Angeles.

Richard Wassell, founder of specialist agency twentyretail, says pop-up stores are a good option to test the reception of a new concept without the risks attached of committing to a long-term lease.

“From a landlord’s point of view, it’s quite a risk taking on someone who hasn’t opened a store before,” he adds. “But the recession is slowly changing this attitude and leaseholders are now more willing to fill empty shops with short-term leases rather than leave stores vacant.” Some

are even helping to fit-out empty shops so that tenants can move straight in and trade.

Wassell says more enquiries are coming into his agency for pop-up shops and they are becoming “much more sophisticated” in their finishes. He believes that the injection of “fun and excitement” of pop-ups will provide more reasons for shoppers to take to the pavements.

But Live & Breathe’s Gray warns there has to “be a good reason to open the stores and it should “not be on a marketer’s whim”. He argues that the best pop-up stores can bolster a brand’s bottom line and even create a new business direction for companies. The most successful pop-ups have the chance to “add a new dimension”, says Gray, brightening up high streets across the UK. 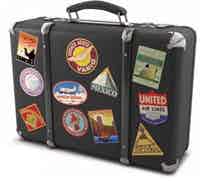 When HSBC International research found that expats are far more digitally connected than other people, it shared the findings online to build rapport and get the dispersed group to spread the word. By Jo Roberts

Cult make-up brand Barry M aims to be as big as Rimmel and has launched a social networking site to harness the help of consumer power.

Football fans may abhor the idea of having a sponsor included in the name of their beloved team’s home ground, but some of English Football’s most celebrated clubs have recently unveiled plans to boost commercial revenues by offering naming rights to their stadiums.