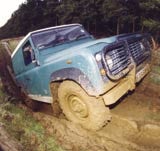 There is a growing feeling in the sponsorship industry that more brands will shun expensive headline deals in favour of creating their own events (MW last week). An increasing number of companies have turned to event creation in recent years because they do not want to “compromise” on an existing tie-up, according to Brian Greenwood, UK chief executive of sports marketing agency Prism.

Prism helped create the Land Rover G4 Challenge in 2003. The event is based on off-road driving to showcase the performance of the company’s vehicles, but it also encompasses sports such as climbing, mountain biking and kayaking.

Greenwood says: “Land Rover has a very strong positioning and wanted to dominate the adventure space. We were looking at sports like snowboarding, but there was nothing that matched what we wanted to do. That led us to the conclusion that we needed to come up with something new and specific.”

He adds that mainstream sponsorship is still the right answer for many companies, stressing that event creation is not a short-term solution because it takes time to build an event. Brands must have a strong sense of identity to go down this path, Greenwood argues. He cites Red Bull, which only associates itself with events that are created in-house, as an example.

Alastair Macdonald, managing director of sports sponsorship consultancy Connexus says: “In principle, I’m a big fan of creating your own event because you have total control and can make sure it’s in line with your marketing communications. If you get it right, it can be a powerful way of communicating, but it’s an awful lot more work and risk.”

Macdonald thinks home-made events will be more prevalent in the future, without ever becoming mainstream. He compares it to advertiser-funded programming and calls the recently launched Audi Channel the “broadcast manifestation” of event creation.

“People can get more depth from the Audi Channel than they can from our advertising,” he says. “Our research shows that people know Audi sponsors things, but the programming allows us to bring all of our sponsorship assets to life.”

Chairman of the European Sponsorship Association (ESA) Nigel Currie denies the mainstream sponsorship market will suffer because of event creation. Sponsorship makes up eight per cent of total European marketing spend, according to the ESA, but Currie predicts this will rise to 15 per cent by 2010.

“It’s very hard to create an event. Everyone would love to do it, but it’s difficult to make them high-profile. You can’t just build your own event and get 15 million people watching.”